Importance of Mars in shooting charts 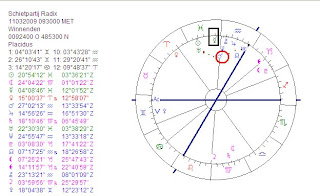 Tomorrow the shooting in a school in Winnenden (Germany) will be one year ago. The chart that you see here above has two important placements: Mercury is elevated (square Ascendant) and Mars is the first planet rising before Sun and Mercury and also on top of the chart.
The Dunblane Massacre happened on March 13, 1996 in Dunblane (Scotland). Here below is the chart, with Mars on top (square Ascendant). 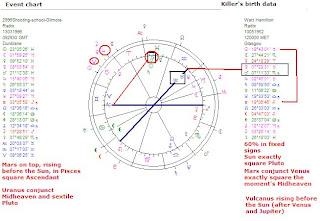 The similarity in the charts of the shootings is the important position of Mars, same as recently in Dutch Zierikzee where a father killed two of his children. Here below is the event chart.

Every day Mars is on Midheaven or on top at a certain moment and at a certain place. It may just be coincidence that in three cases where guns were used, Mars had an important - elevated- position in the chart. Mars is the astrological symbol of fire and firing. Besides coincidence there are other explanations, like special moments in time that reflect corresponding events, like shootings (cuts, getting hurt, etc.). Or the moment that David Beckham was born:) 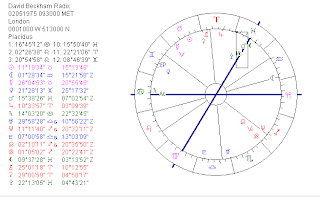 And perhaps that was also a moment with extra male hormones...:) Mars is the symbol of the male gender.

MARS PROMINENCE
Mars can be of special importance in your chart when:
- Mars doesn't make major (Ptolemaic*) aspects in sign or orb 5 degrees
- Mars is rising before the Sun, Mercury and Venus
- Mars is on or square the Ascendant or Descendant
- Mars is on or oppositon Midheaven

The elevated position of Mars in a chart is mirroring a moment when the energy of Mars was more important than it was 10 minutes earlier or a 100 miles away. The meaning of that elevated position is strongly related to the situation and the aspects of Mars. Of course, otherwise there would be shootings every day, somewhere, and luckily there are not. Statistics and astrology don't work the other way around and have to be read in the light of circumstances and never without more information than just that one fact: that Mars often was elevated when there were shootings (but not always...).

RELATED
More about Mars on this blog here...; dozens of examples of the effect of Mars in a chart, in sports, for the military, when people fight each other and when good energy is used to accomplish something. There is a post ' Mars at War' here. Or see the post about the progressed Mars of Naomi Campbell for the growing effect of aggression in a chart.