José Mujica, his chart and his exceptional habits 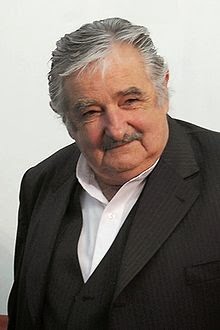 The end of José Mujica's career was near when transit Saturn was opposition his natal Sun and Pluto inconjunct his progressed Sun. Now he can go on living like he used to, in a modest 80m2 house without any luxury with a 3 legged dog and a very old Beetle. That is pretty unusual for a President of Urugay, so I expected an unusual chart. Here is the chart (source is http://carta-natal.es/astrodata/famosos/carta.php?id=379985 )
Uranus rises before his Sun and is 'calling' (not aspected)! This VIP Uranus is a sign of being a rebel, being different, somehow, or wanting to make changes and in fact: he is a 'different' person willing to make changes.

There is an important place for the Moon conjunct Galactic Centre, on the Descendant and inconjunct Pluto. Moon inconjunct Pluto is an important aspect in his chart, as both the Moon and Pluto don't make any aspect in orb 5 degree except for the quincunx between them. The aspect refers to submissive (see: http://astropost.blogspot.nl/2009/04/effect-of-moon-inconjunct-pluto.html ) and forced behavior. The intensity of habits make it difficult to change, even for a leader (Sun without aspects is 'calling' for attention and the starring role) and even for a revolutionary person when it is about systems and the 'people'. In a way, it is a problem to have a Moon-Pluto in conjunction, because you have problems with adjusting. The Moon is Out of Bounds and that points at a key role for emotions, habits, popularity.
Mercury and Venus are also OOB.

With Moon and Uranus as the most important objects (Moon on DC and calling, Uranus rising before Sun and calling) with Sun and Pluto as second best, this chart is the chart of an unusual very devoted and strict  rebel who is a leading authority.

Sun/Moon midpoint in Pisces explains the reigning need for belief systems and ideologies, even more because this midpoint is opposition Neptune. He is being motivated by ideals and a true believer.
A special aspect is Venus in Cancer trine Saturn. Isn't that a perfect symbol of the love of simplicity and economy? But what to do with Venus/Pluto midpoint square Midheaven? Money is strongly related to his status, but in a different way than usual because of his ideals.

People adore him for his simple and unusual way of live. The midpoint Jupiter/Neptune on the IC tells us about the fans and followers of Mujica.

José Mujica sure shows how to make the best of difficult aspects:).