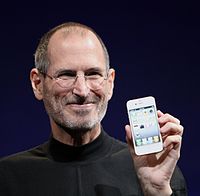 The newspapers say it: Steve Jobs died, a day after the introduction of the Apple I-Phone 4S. He was a brilliant innovator and his ideas will be missed. Here are a few links to posts about him and about his extraordinary talent.

I wrote about Steve Jobs and Wozniak, the synastry and their roles: http://astropost.blogspot.com/2009/05/famous-partners-steve-wozniak-steve.html
Steve Jobs' 'calling Sun' is a symbol of drawing attention (the star, the leader, or say: being brilliant).

When he stepped back Pholus, symbol of the turning point, was there: http://astropost.blogspot.com/2011/01/progressions-pholus-and-steve-jobs.html

Inconjunctions of Saturn reflected his condition a year ago:
http://astropost.blogspot.com/2010/07/chart-of-steve-jobs-and-apple-i-phone.html

Here is the progressed chart of Steve Jobs. The progressed chart of Jobs has Mars ruler 6th house of illnesses in th eight house of life and death, inconjunct Ascendant now and transit Mars elevated, with transit Pluto trine Progressed Moon and Jupiter on the Descendant. Jupiter's presence is not unusual when suffering ends. Isn't Jupiter also a beautiful symbol for a voyage and passing away or moving on? See the label 'Jupiter life and death' for more examples.

For more about his life, see Wikipedia...