Delay, that is what astrologers expect (at least) when there is a Mercury-Saturn combination in the air or 'hitting' a chart. A good example of the Mercury-Saturn aspect is John Cleese's cab experience. He was in a hurry and had to pay a fortune to go from Brussels to Oslo because there were no plains due to volcanis ash.

When you travel with Mercury Saturn something might go wrong with your appointment. So when I met another astrologer in London with Mercury square Saturn, we were both too early as we expected delays! It's harder to be exactly on time with Saturn...even for astrologers. 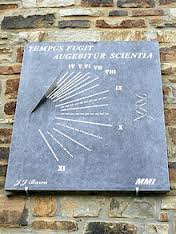 Mercury-Saturn block or delay normal transport.  I wonder if  Mercury Saturn is at home on every airport, always, but I am sure that my weekend flight to Nice on October 5, 2012 had a Mercury-Saturn component. We had a delay when we left and we had a delay when we were going home. Cause: there was malfunction in an earlier flight....We also had to be patient in a row for about 1,25 hours just to get the rental car that we ordered.  I waited for more than half an hour, standing in a line up, to get an expensive bottle of water, as the automatic lemonade supply didn't function and the hall was overcrowded because all of the plains were cancelled or delayed. Of course, the rental car had a bruise (not ours), too. More delay...

Interesting is, that when we were not waiting or traveling, time flew! Especially when I was sitting on the terrace, eyes closed, listening to the trees. Maybe time flew because this weekend was a pleasant one (I had T Venus on my Descendant!). The only nasty thing about the Provence in October : insects. I had mosquito stabs on arm and leg on the right side of my body and now I have big red hot spots and a stiff ankle and antihistamine inside. You can't have them all, can you? Not with Mercury Saturn! There must be a disadvantage about the trip...

LINKS
Daniel Baxter has some nice cartoons about flights and delay...
More about Mercury on Astromarkt