Transits of Uranus  are almost always shocking, surprising or life changing. Today transit Uranus was opposition the Sun of Silvio Berlusconi and unlike before, the judge wanted him behind bars! Of course there is more bad news in the chart to accompany the change: Progressed Mars is inconjunct Saturn. A Mars-Saturn conflict is never easy. Neither is the inconjunct. Mars-Saturn is about discipline (or being disciplined) and quincunxes are about losing balance and loss. He lost his case. Also, during the trial, transit Neptune was in conflict with Mars. Here is the chart with transits and progressions. For more about Berlusconi, click the label!

In 'Transit Uranus, Morales and mice'  I wrote a bit about Evo Morales, Presidente of Bolivia (second term), but not much, more about the surprising elections of that moment. Today, October 26, is his birthday. Even though the hour of birth is still a mystery, I like to mention this chart. It is because the Scorpio Sun conjunct Mars, both quintile Uranus, is so clearly visible in the unorthodox and 'macho' behavior. He ones said that all women got pregnant in the villages that he visited (he didn't say if he fathered their children). 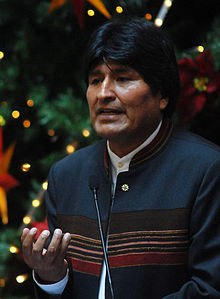 Every person born on October 26, 1959 has Pluto rising before the Sun (for the strategic vision and -says Noel Tyl - for knowing the 'right' kind of people -). They also have Venus 'calling': that makes them keen diplomates and points at the importance of style and women. A Venus-Pluto prominence also tells us that 'to have and to have not' (or money) is an issue. There is more in the chart of October 26, 1959. And that is the number of positions in fixed signs: a sign of strong will.

Two actors, a football player and an anthropologist were among those born on the same day as Evo Morales. It all depends on where you were born, your situation and… the natal chart with hour of birth. Evo Morales became a political activist and a president later.  He used the Sun/Mars quintile Uranus (creative short fuse, creative way to be 'different') in the world of politics where he refuses to wear grey suites and ties.

LINKS
For those interested in the Mars-Uranus effect, see Astromarkt.net. A prominent Mars-Uranus tells us about the importance of revolution, speed (and the risk of accidents), making fast changes, extraordinary use of energy, humanitarian actions and … terrorism. A Mars_Uranus conflict in the male chart is one of the indications of divorce. The other ones are: Moon-Saturn, Moon-Neptune, Venus-Neptune, Mars in Libra, Venus in Aries, conflicts between the first and seventh house.

Visit: Astromarkt.net for examples of charts with Mars-Uranus aspects and midpoints

MORE LINKS
About transits of Uranus, see this post on this blog.
If you want more about Berlusconi, than use the search bar on top (on the left) or click on the label below..