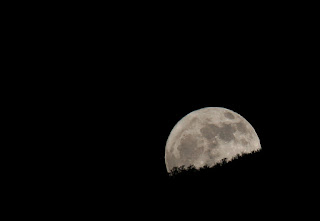 A few days ago someone asked me how to interpret the progressed Moon. Should the progressed Moon be seen as in the natal houses or in the progressed houses? I spent a few days considering the question. As I use not to use houses (or signs) much, it is not surprising that I don't really see an actual correspondence between the moon in house and a concrete event, particularly not because it depends on what system you use. That is completely different when it comes to the angles. The progressed Moon conjunct the Ascendant or Progressed Ascendant marks an emotional moment to remember, one that might change your attitude towards emotions in general. But I promised to have a look, so I did and I here is what I found.

Example 1: Keith Richards falling out of a tree


Example 2: Barack Obama elected in 2008
When Obama became the first black POTUS, the progressed Moon crossed his natalAscendant in the period after the election and before his entrance in the White House. The progressed Moon was in the progressed 11th house of friends, perhaps an indication of how many friends he had at the time.

Example 3: Caitlyn Jenner coming out
Caitlyn (former Bruce) Jenner’s ‘coming out’ as a transgender was with progressed Moon in his natal 8th house of transformation and in the progressed 6th house of clothing but not on an angle.

Example 4: Queen Maxima
Dutch Queen Máxima had to go home and leave her husband in China during the official visit because of an ailment.Progressed Ascendant conjunct Mars and a Saturn-Neptune transit could have warned her before she travelled to China, but with the progressed Moon in progressed 9th house she had to travel, of course:).

That is why I think that it is a good idea to include the position of the Moon in the progressed chart.