When the Force is against you... 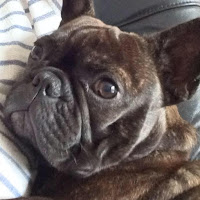 This is about Mars square Pluto in a Solar Return. That is when the Force (any force) is against you. Let me tell you about my personal experience.

CafeAstrology mentioned it, but too late for me:): Mars square Pluto so don't try to get the upper hand. I tried and failed.

You see, I have a Frenchie, and she is very sweet except when you try to take her somewhere without her consent. She just stops and pulls back if you pull. I'd better have stopped, too. I do, now. But it is a bit too late now, and the pain is getting harder. It seems that this little doggy might be the cause of a muscle problem that keeps me on the second floor this weekend as I remember a slight flash of pain following some pulling. Now I dare not use the stairs and it takes a quarter of an hour to get down or up. Intense pain (even with heavy pain stillers) and restricted movements prohibit that I go out , buy presents and do what I like. Mars was square Pluto in my December 12 solar return, separating. In my progressed chart Mars had already been semi square natal Moon and inconjunct Pluto when I felt pain and thought that it was over, later. Around November 16, transit Mars was conjunct Saturn and it started, again. It was AFTER my birthday that the pain got so bad.

I don't want to scare you off. What I mean is: you need not die or get injured in a way that you almost die with Mars square Pluto in the solar return. It just hurts badly. Pluto is STRONG(ER). My Frenchie accompanies me and looks worried when I say Ouch!@%! Ain't she sweet? I almost hope that it is not her fault and something else...

Maybe I'd better try this: http://ahimsadogtraining.com/blog/2008/04/08/dog-refuses-walk/ Or maybe someone has to say 'May the Force be with YOU'!:) See this interview with Carrie Fisher and her  Frenchie (https://www.youtube.com/watch?v=PqsG3x3RQmw) Meanwhile I see the specialists next week:)

Also visit: Astromarkt.net for more on the 'drive to win' with Mars-Pluto http://www.astromarkt.net/astrology_to_study-html/mars-pluto-html/

and remember: it always takes more than just 1 indication. There is also Saturn-Ascendant, Chiron-Sun and Mars inconjunct Pluto in my progressed chart. So don't worry if you have a single Mars-Pluto affliction around. Just don't push it!