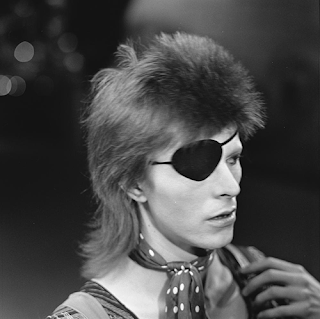 On my blog 'Astrology &Love' there are numbers of articles about couples, happily married or not. David Bowie seems to have said, that he never loved Angie. Yet, they were married for 10 years and he wrote 'The prettiest star' for her. As Angie Bowie told us, this wasn't a happy marriage. He cheated on her and once he almost strangled her in anger. She was saved by his mistress.

So, you may wonder what synastry brought them together and what separated them. It might be the same force: Pluto. His Pluto square her Venus and her Pluto inconjunct (! the sign of no match) his Sun and Mars. The combination intensifies passion and warns for the danger of using violence. Here is the chart of Bowie with transits of the day of birth of Angie Bowie, whose Mars is close to his Saturn and Pluto in the 7th house. 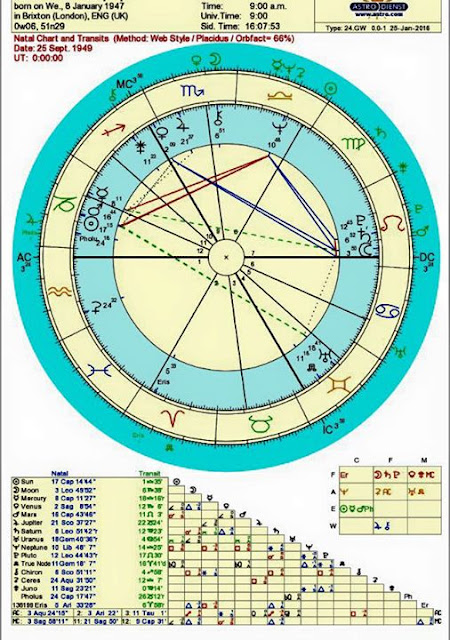 What kept them together? Their not corresponding Moons don't make it easy to get used to each other's habits, though (as the Moon of David is square hers) the different personalities might have been part of the attraction. Saturn in the 7th house and trine Venus helps to stick to a marriage (feelings of responsibility). As long as she permitted his adventures, why would he leave? But David Bowie has strong indications for divorce in his chart:

So it wouldn't be likely that he would remain married the 1st time. Her Sun square Uranus is also a 'risky' aspect for relationships. As her time of birth is unknown, this is all to see.

Of course, there is more between a man and a woman then we know off and there is more between charts than can be mentioned here. Just the fact that it was marriage nr 1 for a man with his aspects and chart would be enough to expect a divorce later. When there is a Mars-Pluto synastry, the sexual intensity could easily turn into dangerous anger. I wrote about the danger of this combination here: http://astropost.blogspot.nl/2014/11/mars-saturn-pluto-synastry-sinester.html If you have such a synastry aspect, beware and take care. It takes a lot of love (and Venus) to ease this aspect. In the case of David and Angie Bowie, there is not so much Venus, as Venus is also challenged by Pluto. It was a good thing to divorce.

LINKS
http://astropost.blogspot.nl/2013/03/divorce-in-chart.html signs of divorce in the chart