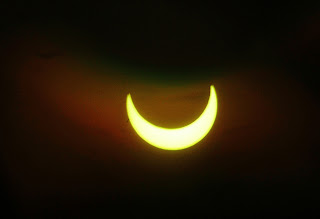 Eclipses are part of a cycle named Saros Series. The Saros series numbers of the Eclipses in 2012 are contradicting all predictions of doom for the next year to come. The first eclipse is on May 20 (solar; lunar eclipse on June 4)) 2012. That is in 14 South and that points at success. The second one is in 15 North (solar on November 13, lunar on November 28). According to Bernadette Brady that it is mumber with an atmosphere of joy! So why worry about 2012? Persons born around May 20, June 4, November 13 or November 28: rejoyce! The eclipses are with you. Those who have the Moon, Ascendant or Midheaven (in natal or progression) in 0 or 7 Gemini, 14 Sagittarius or 22 Scorpio: be happy! Good prospects are to be honored! No better news than good news! However...Let's first see what happened last time when there were eclipses in 14 South and 15 North.

In May of 1994 during Saros serie 14 South Nelson Mandela became the President of South-Africa. But after November 1994 (15 North) the Mexican economy was in crisis!

I don't now if there were good or bad events or changes in the lives of people born on May 10, May 25, November 3 or November 18 soon after the eclipses. If you were born on one of these data, please tell me and my readers about it. As far as I know there have never been studies about the supposed to be effects of the eclipses. But given the fact that the saros series of 2012 have a good press, let us wait and see and hope for the best!

My Brother and Mother died during eclipses, Dad was confirmed with cancer during one and passed 3 months later. On the Dec 21 one last year I was rear ended and my car totalled (good for me - newer car). These past eclipses ended a 45 health battle for me, for the better. Birthday is November 12 - looking forward to next year's eclipse season. (Only a Scorpio would say such a thing after admitting family deaths - it was a chapter that seriously needed to end).