This post is about two teenage girls (Pauline Parker and Juliet Hume) planning the murder on the mother of one of them, in cold blood. The movie ‘Heavenly Creatures’ ( on BBC1 this night) was based on that cruel true story. I plan to see it.


Of course, we don’t have the hours of birth (no Ascendant, no MC, no degree for the Moon, no Sun/Moon midpoint) but we do have a clue. We see that the girls were no match for each other, but that they were attracted to each other and aroused (somehow) aggression in each other that was already there from the start and found no way out in sport or sexual activity.
1. being together (Sun-Sun) brought them out of balance (inconjunction)
2. they also shared a short fuse (they shared a Mars-Uranus minor aspect in the natal charts).
3. they completed each other with that. One had Mars rising before the Sun. The other one had Uranus rising before the Sun.
And that is only a part of the story... 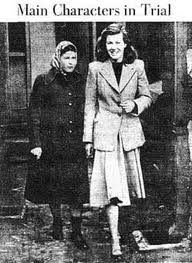 The two girls, age around sweet sixteen, used a brick in a sock to brutally kill the mother of one of them. And they had planned this months before! They got away with about five years in prison and one of them, Juliet Hume, became known as Anne Perry, writer of detective stories. I want to have a quick look at the interaction between their charts, and between progressed charts. One of the conditions for release out of prison was that they should never meet again, because of the negative influence they had on each other. The mother didn’t want her daughter to see her friend, either.

SYNASTRY
Pauline Parker (daughter of the victim, Honora, born in 1909) was born in Christchurch May 26, 1938. Her friend Juliet was born October 28, 1938. Look at the charts.
They have Sun inconjunct Sun in synastry and that is a statement for unbalance between them or for the fact that being together brought them out of balance.

The Venus of Juliet aka Anne Perry was opposition the Sun of Pauline, explaining the sympathy, admiration or love for each other. The opposition could reflect the present distance between them…

There is another inconjunction  of importance, resonating the natal aspect of Sun inconjunct Eris of Juliet/Anne: it is Eris of Pauline inconjunct the Sun of Juliet. Eris is the symbol of discord. The interaction between them created (Sun) discord (Eris) in a disproportional way (inconjunction). Like a jig saw the synastry aspect matched the natal aspect. Every pot has its lid.

Now that we know that their was love or admiration on one side and disproportional discord between or because of them, let’s see how their positions were at the day of birth and at the day of the murder (June 22, 1954) in the year that the Progressed Sun of Pauline was semi square the natal Sun of Juliet in the period of the murder, indication of lives getting involved in a frustrating manner.

The later author was born with Mars rising before the Sun, sextile Pluto and sesquisquare Uranus. I have written about Uranus-Pluto, Mars-Pluto and Mars-Uranus before and that combination issues ‘impulsive action’. In bad cases: sudden use of violence or sudden anger. Moreover: Mars is opposition Eris (and that is an aspect that we see when wars are beginning to join the military and discord or aggression and discord). (And in fact, those were these kind of days (see this: http://www.fasena.de/hamburg/28101938a.htm)


Now we have impulsive act of discord, …at least. It could have been a great chart position in competition games like football, but …she is a woman. It could have been great for techniques, but… in those days women didn’t get the chance to do techniques. So there was a lot of energy and drive and short fuse ready to explode one day. That day, June 22, 1954 transit Pholus (the catalyst) was square her Sun and progressed Mars was square natal Pholus and half semi square the natal Sun. That is a Sun-Mars-Pholus combination meaning a turning point in life (with the risk of shooting her own feet) and a turning point in a struggle or fight (ditto risk). Something made her very angry.

Pauline has Uranus rising before the Sun and Mars/Uranus midpunt on the Sun. Mars is half semi square Uranus, a minor but not insignificant indication for an explosive nature. It is amazing how many 'harmonious' aspects are involved in her natal chart, in transits and progressions. The natal chart has Sun sextile Eris (discord's easy way out). It is all so easy going and it seems not to be in line with the events if you don't look at sextiles and trines as the 'easy way out'-aspects. Her diary is rather clear about it: she didn't really seem to have feelings for her mother, besides hate. In her natal chart the close aspects (max 5d orb) are Venus trine Jupiter  and Mercury trine Neptune and Sun square Jupiter. Those are not the aspects of fighters. There is only a wider square between Mars and Neptune, if you would not consider the half semi square with Uranus. It is like the 'hidden chart' of OJ Simpson. Fortunate aspects at first sight, dramatic minor aspect combinations.
Pauline Parker killed her own mother on June 22, 1954. She hit first. On the day of the brutal murder transit Pholus was trine her natal Sun (an easy turning point) and sesquisquare progressed Sun (a double turning point in life!) with transit Saturn trine progressed Mars (disciplinary measures). Ceres (symbol of motherhood) is trine natal Sun and sextile Eris. Transit node square Saturn and trine Uranus introduces the community with little freedom (like in jail). And there is Progressed Sun sextile Sedna (symbol of the daughter) highlighting the easy way out of being the daughter of her mother. Transit Uranus square progressed Venus shows unusual excitement. Progressed Mars conjunct natal Venus activates a passion.

More about the case:

Also visit: Astromarkt.net for example about Mars-Uranus.  or about the inconjunction (quincunx).