Venus, Ceres and the Molasses Disaster 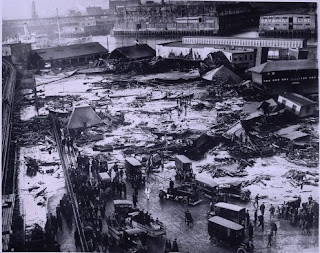 For some reason my attention was drawn to the Boston Molasses Disaster of January 15, 1919. Maybe it was an article about ‘The Folklorist’ ( a new TV program). Or is it transit Venus sesquisquare my progressed Ceres? Anyway, I searched for the hour of the moment of disaster and it was mentioned in urbanlegends.about.com: 12.40 pm. What struck me in the chart was the conjunction of sweet Venus and Ceres, the symbol of nutrition. Together they make a sweet thing to eat, and maybe in a fairy tale the flood after the explosion of a molasses tank, would be a kind, tasty and happy river, but it certainly wasn’t a nice product then. It was hot, sticky, fast and an 8 feet high wall of candy-to-be that killed 21 and injured about 150 people (and horses and dogs). The (public domain) picture above was found on http://jerileewei.hubpages.com/hub/Death-by-Molasses, where you find the complete story with more pictures, a map and a recipe for those with self control:).

The most important positions in the chart of the disaster are for Venus and Ceres, Neptune, Uranus, Saturn and Quaoar. The tightest aspects are:
-      Venus conjunct Ceres (sweet food)
-      Pluto inconjunct MC (transformation of a state, involving a loss and a problem)
-      Quaoar square Ascendant (creating a new situation or perspective)
-      Saturn-Uranus-Ascendant (unexpected sudden blockade or end)
It is also important that the Ascendant is changing sign, introducing a new situation.
The Venus-Ceres conjunction happens to be one of the tightest aspects, in opposition with the angular Neptune. Neptune is for chemicals.
Such a chart can’t (of course) predict a disaster. It is just describing what could have happened at a certain critical moment in time and place (MC-Ascendant) on a day that luxury food (Venus-Ceres) was an issue. If you have a Venus-Ceres aspect in your chart, sweet candy might be an issue for you. At the moment, with a frustrating sesquisquare between them, it is apparently an issue for me:). So I will skip that recipe!