Back from a Mediterranean Sea voyage I have some 'ferry' tales related to astrology. More specific, about Jupiter and Saturn. But first I want to show you something.

ONE DAY FOR A YEAR
In Venice, at San Marco Place, I noticed this clock. Watch the zodiac signs and the 24 hours united... It reminded me of ' one day for a year'. That is term used in progressive astrology where we use a day after birth as an equivalent for a year after birth. Wiki explains it well...This picture shows it. 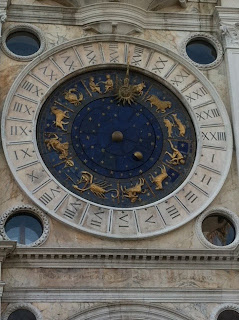 BTW It wasn't easy to get there, in Venice. It went the Italian way...My husband and I planned to go from our ship to San Marco Place by ferry. So we bought tickets and joined a patiently waiting man in suite and tie, (yes, of course he was an Englishman, and a very nice one:). Meanwhile, the ticket office closed, so that we couldn't ask why there was no ferry at all in 30 minutes. The Englishman said that they were supposed to arrive every 10 minutes, but as there was no schedule around, we couldn't verify this. Finally, a boat showed up. Two busy young Italians on the phone and talking with wild gestures told us that their ferry was not THE ferry (no no no, they absolutely didn't go to San Marco, they went to the airport). So again we waited in the sunshine, wondering if we should simply start walking, until, on the horizon, another boat turned up. After a total of 45 minutes waiting this ferry brought us to San Marco Place. Can you imagine what fun it was when we saw the busy young lads there, on the shore, hanging around a bit? 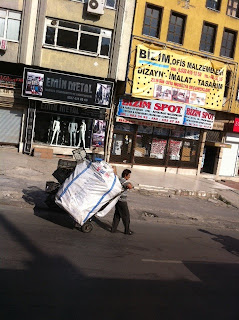 JUPITER
The trip started with transit Jupiter exactly square my Progressed Sun. Jupiter happens to be the international of the planets. This journey brought me in 5 different countries (Italy, Greece, Turkey, France and Spain) and I met people from Venezuela, England, USA, Philippines, Japan and even more nations. Very Jupiter! Jupiter is also the symbol of optimism. Maybe that is why I dared to sail away during Varuna square Eris (with Varuna inconjunct my Sun).

SATURN
In Izmir (Turkey) I saw this man (picture above) carrying a heavy load down hill and I immediately thought of Saturn. Saturn hit my chart, too. While I was traveling from Venice to Athens via Istanbul to Rome and Barcelona, our family dog died. You know that the natal positions of dog respond to transits and progressions as much as the charts of humans do? She was ill since a few months (see the doggy story: http://astropost.blogspot.com/2011/12/doggy-story.html ). She died with transit Saturn again (!) hitting her natal Sun, transit Neptune trine Mars and transit Uranus inconjunct Mars.

I was told when I got back, last night. Progressed Moon inconjunct Saturn and transit Saturn trine progressed Ascendant say that it was a moment for an 'ending' and a moment of goodbye with a loss involved (inconjunct). Perhaps it is also time to face real life again, after these 13 days of taking it easy. Life is not just about having a good time, seeing highlights and remarkable buildings. In fact, it would be boring if it was, they say. I am not convinced, yet. I have to do the laundry...