The synastry in the Petraeus affair 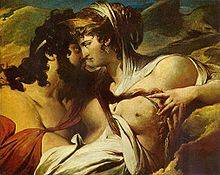 A few days ago I wrote about the Venus-Saturn synastry in the Petraeus affair. The Saturn of Paula Broadwell is opposition David Petraeus' Venus. Paula's Venus is 112.5 degrees from her Saturn (that is a square + half semi square) and general Petraeus has Venus sextile Saturn. So, the couple shares a Venus-Saturn connection. Now I know that there is even one more Venus-Saturn connection. Mrs. Holly Petraeus was born July 17, 1952 and that means that her progressed chart has Venus conjunct Saturn this year. That completes the triangle of Venus-Saturn.*). But how about the rest of the synastry between the three of them?

It is interesting to see the match between the charts (he Scorpio, she Cancer, Venus in Sagittarius and Venus in Leo). Her Neptune opposition his Mars may be difficult, but there has to be some difficulty to get going, doesn't it?:)
The present difficulty is named Paula. Paula's Mars is straight square the Sun of Holly and that means: competition! And hurt, of course.

Holly's chart only has Mars semi sextile Saturn as an indication of divorce. Unfortunately Petraeus' chart has more of the aspects that are frequent in the charts of divorced men (Moon-Neptune, Moon-Saturn, Mars-Uranus...). Time will tell how they deal with this. And if they stay together, the synastry between the signs in their charts won. At present, Paula and David's natal charts and Holly's progressed chart contain a Venus-Saturn aspect. They are all connected by the Venus-Saturn painful situation.


LINK
Infidel women and their charts: http://astropost.blogspot.com/2011/03/cheating-women-and-their-charts.html including the 'difficult relationships' aspects in charts of females and males.

The Stepford wives were perfect. The author's chart has a Venus-Saturn conflict (Venus inconjunct Saturn): http://astropost.blogspot.nl/2012/01/venus-saturn-and-stepford-wives.html


*)Also, her progressed Saturn is square her Uranus (for breaking free, perhaps).

Very interesting. The Magi call the Venus Saturn hard aspect in synastry the 'heartbreak' aspect, and it sure seems to be.