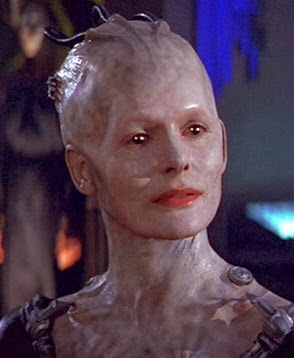 Astrofix once published an impressive list of meanings for Uranus-Neptune, like 'resistance against assimilation' and I had to think of the Borg. Uranus conjunct Neptune in 1821 mirrored the independence of Peru and Mexico and other Latin-American states. Uranus was conjunct Neptune in 1993 and in the chart of the Treaty of Maastricht, the first step to political integration (say assimilation) and the first step towards a political European Union, in spite of the resistance of large minorities. The Borg ('You will be assimilated") in Star Trek are the drones of the collective.

In 1993 Honda started to develop humanoid robots (see http://www.plasticpals.com/?p=25266 ) and perhaps that is just coincidence…

Now what if Uranus/Neptune midpoint combinations are in hard aspect with your personal planets, Sun or Moon, or with your Ascendant or Midheaven? Or in variations (like Venus/Uranus-Neptune, Venus-Neptune-Uranus)?

I found some examples that I mentioned on Astromarkt. Let's say that you can be a robot in love, influenced by your 'collective' being together with your loved one, when Uranus and Neptune join Venus, but maybe it is the collective concept of beauty that inspires you in your songs or art? This combination makes love blind. French singer Edith Piaf (see Astro.com) had Neptune opposition Venus/Uranus midpoint and in the end she married a young men who inherited all of her money. She had her very own ways in love.

Needless to say, that it matters if Uranus or Neptune or Venus is important in a chart and that more signs are needed (not just one aspect or midpoint) to mirror the negative influence of excitement or technology in a chart.

Uranus/Neptune midpoint is now at 353-354 degrees. That happens to be on my Northern Node, symbol of the 'community'. Maybe that is why I thought of the Borg?:)

LINKS
See the labels for more on Uranus-Neptune. Did you know that transit Uranus AND Neptune were inconjunct John Wayne Bobbitt's Ascendant when he became 'famous'? Some odd way to find your way to the papers…

or translate the Astromarkt page where you can read (chart included) that on the very day that the Maastricht Treaty (first step to European political unity) was in effect (November 1, 1993) Uranus conjunct Neptune were  both inconjunct the Ascendant.