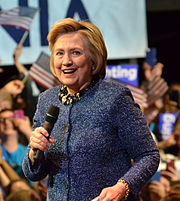 In January 2016 the progressed Moon of Donald Trump reached her highest degree in declination. From then on, the Moon descended. An earlier study of mine showed that your most popular years are the 4 years before the progressed Moon’s highest position in declination and that the year after that highest point usually is the most difficult one. It is like descending steep stairs and knowing that it will take a long time to reach that level again.
Hillary Rodham Clinton’s progressed Moon, however, is at a rather low level, but going upwards. Husband Bill’s progressed Moon is about to reach top level this year. The lowest position of the progressed Moon is reserved for retirement, stepping back and taking a brake, sometimes to prepare yourself for ‘climbing’, like Hillary Rodham Clinton did when she didn't show herself as much as to be expected in the first weeks and months after her nomination.

I am going down, unfortunately, since early this year and that is fully understandable if you knew my situation. Earlier, my health seemed to be improving and I was looking forward to a nice couple of years with husband, family and dog. Now I know that any hope for those years was in vain and I hope to spend the few years (?) left as good as I can.

“By June 6, 2016, she had earned enough pledged delegates and supportive superdelegates for the media to consider her the presumptive nominee.[428] The next day, Clinton became the first woman to claim the status of presumptive nominee for a major American political party."

Her progressed Moon was rising again!

More about the chart of Hillary Clinton:

May your situation improve. I value your posts and wish you well.

Thank you very much!:)