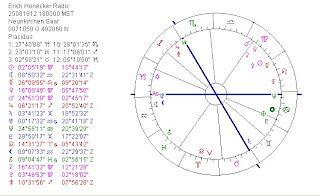 On the 18th of October it will be 20 years ago that Erich Honecker was forced to resign and was replaced by another leader of East Germany. He never had to pay for his political errors.
Just like other dictators, there is a hard aspect between Sun and Saturn in his chart. It is the proposition for the man who manages to be in charge and preferably: alone. There is a post on this blog with more examples of the effect of Sun-Saturn.

We might wonder why he was never on trial. He is responsible for the death of people who wanted to escape to West Germany, for example. He is responsible for 'the wall'. The issue of limited freedom is prominent in his chart. Saturn on IC, Uranus on the Ascendant and both are in aspect with the Sun. Maybe he was in fact the prisoner of his own system. When he was forced to resign, transit Uranus was trine his Sun and that means: liberation! There is a trine between Saturn and Uranus in his chart. A trine between the planets of limited freedom AND the resistance against it, makes it easy to break free.

There is a Yod of Sun, Uranus and Pluto pointing at the Sun (leadership in a dramatic change). In the end he had to leave his home country and he died in Chile. In a way he had his punishment but it was not the usual prison cell. So what 'lucky star' helped him? He could have been arrested, but...there was an inconjnction!
Uranus inconjunct Pluto is the combination for a dramatic and sudden change (such as an arrest). The inconjunction might work as a positive 'but' when it is an inconjunction between difficult symbols and in difficult times.
For more about the effect of the inconjunction, click the label.