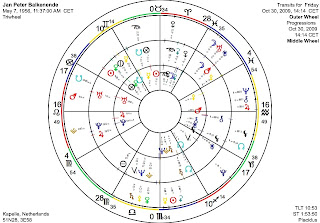 Dutch Prime Minister Balkenende might be a serious candidate for the 'Presidency' of Europe, the chairman of the counsel. If you don't know who he is, see his prophile here. President Obama invited him to join the G20 in Pittsburgh last September, because of his international expertise (and because of the international importance of the Dutch economy). His chart confirms that he is a serious candidate. That doesn’t mean that he is the one, because being an MP is also an important job. He is the head of the government (the Queen is the head of state). It is an honour to be considered a good candidate.

TRANSIT SATURN INCONJUNCT MC AND SEXTILE SATURN (Inconjunct MC)
At present, there is an interesting composition of Saturn and his natal Midheaven.Transit Saturn is inconjunct his natal MC. In his natal chart Saturn is also inconjunct Midheaven. So the present transit is confirming the existing inconjunction of Saturn and Midheaven. Transit Saturn is sextile natal Saturn. There is sort of a closed Yod pointing at Midheaven, which means that THIS might be one of the most important periods in his career. Is it good to have an inconjunction of Saturn with Midheaven? What kind of charts, transits and progressions do other (maybe secret) candidates have? We will know next week. But we already know that he is made for the job. Why?


1. The Sun is on top of the chart, square Ascendant. He is above all a leading figure, drawing attention, being in the centre.Mr. Balkenende has the Sun opposition Mars/Jupiter and that is a midpoint yod pointing at successful leadership.

2. Jupiter is the planet of the international and of the positive and optimistic nature. Jupiter is in the first house, close to the Ascendant, on the midpoint Pluto/Ascendant, semi square Sun/Pluto, half semi square Venus/Pluto, square Mars/Pluto and sesquisemisquare Uranus/MC. Jupiter is the key to to combinations with Pluto. These are successful combination. Jupiter is also 112.5 degrees from Midheaven (square + half semi square), connecting 'travelling' and 'progression' to the career. Jupiter was on his Descendant at the time of the first rumors about his candidacy. That means that he had support (from form example Mrs. Merkel).

So there are reasons why his name is on everybody's lips these days.

CHRISTIAN POLICY
Neptune is on the IC (Nadir: Dear Brutus says that is means being hopeful): I think it is reflecting the ideology or relgion that is related to his career.
Jan Peter Balkenende's political party is the Christian Democratic Alliance (CDA) and he is a devoted member of the Protestant Church in the Netherlands. A prominent Neptune is great in the charts of artists and popes. It might cause an unsatisfying position in real life. Sun/Moon is opposition Neptune: he is motivated by his faith, visions and beliefs rather than by more 'earthbound' motivations. He is an idealist. Mrs. Merkel and President Obama also have an important Neptune (square their Sun). It seems that now is a good moment for religious or ideological political leaders.

CHANGE THE WORLD...
Uranus is also important in the chart of Mr. Balkenende. Sun/Moon is square Uranus. He might be the kind of person who 'goes his own way' and causes upheavel from time to time. He is likely to want to ' make a change' , just like Obama. The international European setting might be a perfect playground.

The present Dutch government carries the name 'Balkenende IV' and that is because this is the fourth time that he is MP. The other three periods were never completed because of the fall of the government. That is not just because The Netherlands are in a period of political change (the political parties joined in Balkenende IV only have the support of 1/3 of the population left, right now). If Balkenende will become the European Chairman this will be the fourth uncompleted episode and Uranus (symbol of the flashlight) flashed him away again.


WHAT ARE HIS CHANCES?
His chances seem to be growing (at least: in the eyes of the Dutch presss☺) . There are transits pointing at departure or decay or delay, like transit Saturn inconjunct his natal Midheaven. That is exactly what is happening. The name of the chairman of Europe would be known today, but there is a delay and it will be known next week now. Inconjunctions always have a ' nasty side' . At best this transit means that you get respect, but...that there are considerable disadvantages related to your social position. Does that mean that he is giving up on the job of MP in the Netherlands and will have to say goodbye to his present living conditions? Or does it mean that he will not be the first European President? I don't know. I don't know all of the charts involved and I don't even know when the decission will be made or will be announced. If you think that you have a clue, and why (in astrological terms) please post your comment or use the poll!

The important Uranus and Neptune (remember, they are connected to Sun/Moon in the natal chart) are both afflicting the progressed Ascendant. Transit Neptune is inconjunct progressed Ascendant. There is a lot of commotion in the press about the possible new job and he keeps denying that he wants to leave the Netherlands and go to Brussels. Perhaps that is just it.

There are also nice transits and progressions like transit Jupiter trine progressed Mercury final dispositor of the MC (on the 8th of November) and Venus trine progressed Venus ruler 10, on the 5th. Other positive sign: Jupiter is conjunct Midheaven in the Solar Return chart for this year. However, Saturn's position is reason for concern. Would he consider to be a vice president (if that is possible), I wonder? You see, I wonder about the ' but' related to this inconjunction. It might just be the fact that his personal life would change (moving, his daughter to another school, other routines)...It takes the chart of the moment of decission and the charts of the other candidates and I won't speculate.

MORE ABOUT HIM…
There are more positions is fire and air signs than in earth and water signs in his chart. He is expressive and talkative. He is a communicator (Mercury is strong in Gemini and final dispositor of Midheaven). And look at the position of the Moon in Aries, rising before the Sun. It is a well known fact that mr. Balkende has a strong relationship with his mother. He calls her every day! Moon in Aries oriental and sextile a strong Mercury…

His chart shows that he is a leading figure and transits tell us about a strong focus on his position today, with maybe an overload of responsibilities. With Sun quindecile Saturn and Saturn inconjunct MC there is no doubt about his desire to manage and be in control. Just like most of the American Presidents he has an aspect between Moon and Jupiter (a sesquisquare). Another thing that he shares with famous politicians is a midpoint combination of Mercury, Saturn and Pluto (Saturn semi square Mercury/Pluto) that gives strategic and political communications and thinking abilities. If the time of birth is correct there might be concern about Saturn's inconjunction with Midheaven, if it was not so that he has stepped back 3 times before and still became the next PM.

PS How about the three wheel drawings? Like them?

HI!
I read your blog posts regularly and love them! The tri-wheel? Not so much :) I have a mercury-pluto-saturn and I studied politics:-}. Keep up the good work!

Thanks for your input, Elena! I'd like the tri-wheel if the radix part was larger...