Prince William has been a military man up to now and he wants to start a career in charity (like his father Charles) while waiting for the moment in the far future when he will be the King of England. It is not surprising, this wish. You see, Neptune is positioned on the Ascendant and that is an important position that I found in charts of sensitive and empathic persons who don't care too much about money and more about 'being good and doing well'. Neptune is a rather romantic idealistic symbol. In Prince William's chart Neptune is inconjunct Venus, the final dispositor of Midheaven. His father has Venus and Neptune opposition Midheaven. Charity might have something to do with Venus-Neptune. In the case of Prince Charles there is also artistic talent (see Art&Astrology) about Charles, the water colour artist. Perhaps William inherited some of that, too. No need to explain to astrologers why Venus-Neptune is a difficult combination for love in the charts of males...


Prince William will be a king one day, so will Willem (William) Alexander in the Netherlands. They both have the Sun on the Descendant, reflecting the leading role and they share their first name. Here are their charts next to each other. Jupiter on the Midheaven of William signifies being perspicacious.. according to Dear Brutus. 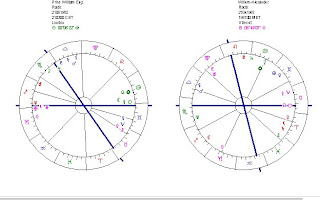 For more about angularity, see Dear Brutus'site with interesting views...