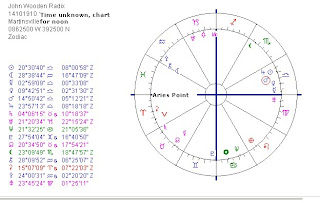 The LA Times has 99 things about John Wooden, famous basketball coach, on his 99th birthday, things that you can read here...

From time to time I like to add charts to the list of other examples that I have of indications for getting old. John Wooden has a lot of positions in air signs. That is in favour of getting old (just like earth signs). On his day of birth Uranus was square Sun/Jupiter. He has Sun conjunct Jupiter and square Uranus for being inventive. The Sun-Jupiter-Uranus combination has a good influence on age. For more about aging, see the article on my site Astromarkt...

The Sun/Jupiter combination is square Pluto for successes. Lots of coaches have an aspect between Sun and Pluto. He has a wide trine, with Jupiter as the bridge between Sun and Pluto. They often also have an important Venus, because they need to be diplomats even though they are authorities. Wooden had an orientation on sports (Mars is rising before his Sun to show that). Activity, energy and being driven is prominent in his chart, also because of the lack of placements in fire signs.

His progressive Sun is changing sign, so his life style is or has already been changing (what is to be expected at a certain age) and because of the square between Sun and Saturn in the progressed chart, this might have been hard. It is exciting perhaps to be in the (positive) news today, with transit Sun square natal Uranus...The daily motion of the Sun over your natal position is reflecting the 'style' of the day. And Uranus is the planet of the news and excitement!