Jupiter, zeppelins and a lady 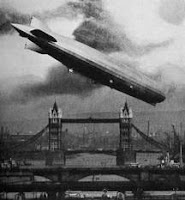 This week I watched a documentary named 'Farewell' about Lady Hay Drummond-Hay, the first woman to fly around the world in ...a zeppelin. She published about the flight of the Graf Zeppelin and was famous in the days before the big crisis and before the Second World War. She died too young, after severe illness in a Japanese prisonners camp in WWII. What I like to mention about the chart of her day of birth is: Jupiter! Jupiter is 'calling' (no major aspects in sign or orb 5 degrees) and Jupiter rises before the Sun. That is a very prominent Jupiter.
Jupiter is the symbol of the international, travelling and publishing. The prominence of Jupiter in her chart is perfectly corresponding with the main fact that we know about 'Gracie' Hay Drummond-Hay.