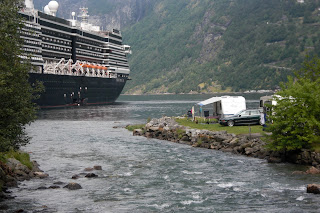 A few months ago I booked a cruise in the Mediterranean Sea. We will sail from Venice to Barcelona, via Athens, Istanbul, Izmir, Napels and Rome. It will be our fourth cruise. Earlier we went to Norway (twice) and to the Baltic (Saint Petersburg,  Helsinki, Stockholm, Kopenhagen and Tallinn; we plan to 'do' all European capitals, so still some to go:).
My Pisces Ascendant conjunct Jupiter might explain why I like cruises, even though I get seasick when it storms. This position makes it easy to spoil yourself, too! So it is perfectly in line with a relaxed (I hope!) trip at sea.

The sea is part of Pisces in the astrological vocabulary and so is Neptune. Disasters at sea happen now and then, but this ship (Costa Concordia) and the Titanic hit something solid with a (not exact) minor aspect between Neptune (god of the sea) and Varuna (the symbol of the god of the waters). The Titanic disaster had Neptune sesquisquare Varuna. Costa Concordia had Neptune biquintile Varuna. Also, the position of Varuna on January 13, 2012 is square the Ascendant of the moment when the Titanic sank. And there was Sun opposition Varuna on January 13...

It might just be coincidence. But it was reason enough for me to have a look at the astrological positions during my cruise, as Neptune (and Varuna) move slowly. Luckily there is no connection between them.

Now I wonder about captains: are Neptune, Pisces and Varuna good positions for a captain or an officer on board? Will they be attracted by the sea? Or do people with these influences act like I do: avoid a profession with lives at risk and try to have important data checked by another person, because they know that it is hard not to 'drift off' or forget about things. Neptune/Pisces is very distracting. For example: I should have done that checking when I thought to have found the day of birth of the captain of the Costa Concordia. He looks younger than he is!:)

LINKS
Transit Mercury opposition Neptune and what happens when you travel…
http://astropost.blogspot.com/2011/07/mercury-opposition-neptune-day.html

About Varuna and floods:
http://astropost.blogspot.com/2011/01/varuna-floods-australia-and-brazil.html


Also visit: Astromarkt.net about the history of Neptune in Pisces (and revolutions).