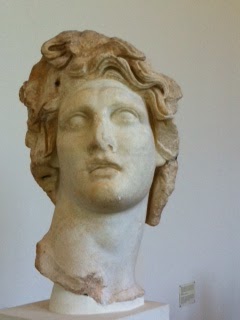 I went to Rhodes (Greece) last week because it was one of the few sunny European spots with a temperature of 25 degrees Celcius and more. Never been there before. It was simply the best place  to be considering the weather and the fact that it was a very very last minute. It was a perfect choice: good hotel, nice people, interesting sites and above all: SUN! There must be a reason why Helios is the god of Rhodes! Helios means Sun. Rhodes is a sunny island.

Rhodes is east of my Mercury/MC line in Astro Click Travel. I had the idea that I was talking and reading a lot more than usual. This instead of writing and blogging, I mean. But I also slept a lot:). I finished Dan Brown's Inferno. I shopped on the airport and I had accidentily chosen the English hard cover instead of the paper back, which was in Dutch. (May I recommend Inferno?)
I also read a lot about Rhodos, the history of Rhodos and Greek mythology, unfortunately translated from Greek to Dutch in a way that was very confusing sometimes. I was particularly interested in the myth about Ouranos and Kronos.

Uranus (Ouranos) in astrology represents indepence and revolt, while Saturn (Kronos) is more the symbol of the status quo. The myth is a contradiction of that idea.
In Greek mythology Ouranus was the god of the days before real time began. He was the god of heaven. He was also a terrible father who threw his children to earth's depts because he was afraid that they would take over his power.
It was his son Kronos (Saturn) who - inspired by his mother Gea = earth - bit off the genitals of Uranus, took over the power and liberated his brothers and sisters. So Ouranus was the bad guy and Kronos revolted.
That was before Kronos started to eat his children. This made me think of the concept that the revolution eats his own children (after the revolution, of course:).

It was Zeus (Jupiter), eventually, who conquered Kronos. When he was born, his mother Rea gave a stone instead of the baby to Kronos. That is how Zeus was rescued. Later Zeus liberated the eaten children. In fact, he did a lot more. It is interesting how violent the gods and heroes of mythology are, especially when you consider the fact that the story blames Pandorra for opening the box of evil (like Eva ate the apple, also being curious), closing it just in time to keep hope with us. (Curiosity kills the cat.)

Now how does Uranus become the symbol of independence and being free, while in mythology he is in fact a nasty castrated father who married his own mother! Interesting that we can't see Uranus when we look at the sky above and that Ouranos was deposed by Kronos. It is just a story that tries to explain the beginning of humanity (simply said, I mean). But the concept of freedom doesn't seem to fit in with the story about Ouranos. Erin Sullivan explains it on Astro.com: http://www.astro.com/astrology/in_uranus1_e.htm
Isn't it funny that the planet Uranus turns the other way around and that the meaning of Uranus in astrology also seems to be 'the other way around' when you consider the myth about Ouranos? 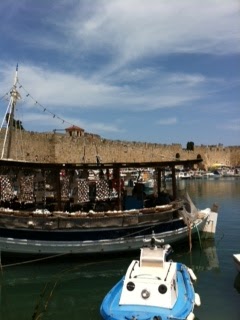 ASTRO TRAVEL
OK, back to easy, back to holidays.
Rhodos is near my Mercury/MC, the Costa Brava is my Pluto /Ascendant line and that is supposed not to be relaxed, but stressed. But I like Barcelona! Pluto/Ascendant should ruin relationships or introduce fated ones on that line. This never occured to me over there. Perhaps this is, because it is also east of my Jupiter/Ascendant line and that makes it one of the most pleasant places to stay! As I have Jupiter conjunct my Ascendant in the natal chart, this aspect resonates the aspect in the birth chart, for more effect.
In other words: my Jupiter conjunct Ascendant 'works' on the Jupiter/Ascendant line over Barcelona (and Valencia, Toulouse and Brussels, too).  I don't have a Pluto-Ascendant natal aspect and I don't recognize the effect on the Costa Brava.

Another example: I have a wider MC-Venus (7d+). The Venus-MC line is on Rome, Copenhagen, Venice and Muenich, places where I have been and that I really liked (uh well, who doesn't?:). Maybe that is not a good example. But I intend to look for those destinations with a Jupiter-Ascendant, Venus-MC or Sun-MC line. Considering the fact that I have these aspects, why not use the beneficial side of them?

Now I wonder about you?
1. do the lines of Astro Click Travel correspond with your experiences?
2. do those lines seem to be stronger when there is an aspect in the natal chart between the two components of the line as far as you know?
3. ever visited a place on your Venus-MC or Jupiter-AC line? And, how was it?
4. any more examples, or examples of the contrary?

Please do the poll! It is on the right, until May 7. Later I will post the results in the comments.


Also visit: Astromarkt.net for example about Saturn and Uranus, the combination of restricted freedom and breaking fee: http://www.astromarkt.net/saturn-uranus.html

I'm wondering about how many miles in every direction does an astro aspect cover. So if your jupiter line is a quarter of an inch from a city....which might be three hours away...are you still under the influence?

Good question! The answer might be that it is like with orbs (I take them narrow, abt 5 d). But on Astro.com they mention "east of the line" without longitude degrees, so I'm not sure about their rules. Five degrees is a lot of miles, already!