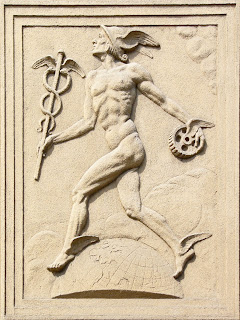 Uranus is always flashing and Mercury is fast. So this post about Mercury-Uranus transits will be short! Just before I move on, I like to mention that I experienced transit Uranus square Mercury and transit Mercury square Uranus.

As Mercury's transits are fast and often unnoticed, I never paid much attention to them. But I read CafeAstrology and they are right: transit Mercury square my Uranus indeed interrupted my thoughts. The Mercury-Uranus transit was about my mother having fainted. I received an alarming call coming from the nursing home, but a few hours later it just seemed to have been the start of a cold and the effect of not eating enough. Meanwhile I was in between leaving the office and going to the nursing home and trying to finish my job for the day. There was a tension between the need to see my mother and the need to do my duty. I can't run to the nursing home just like that and drop it all.

The next transit (Uranus square Mercury) was on the day that I had myself informed about my pension fund. The square didn't do any harm, on the contrary. It was a rather pleasant surprise and not shocking. The meeting interrupted another meeting at the office (I had to leave the room for it).
So let's say that transit Uranus only interrupted my job, again, just like Mercury transit did!

In February 2014 Uranus will again be square my Mercury. I wonder what sort of amazing new information I will get then! And how, where and when I will be interrupted, again.

Have you noticed interruptions during transit Mercury - Uranus or vice versa?

Funny enough I live in southern California. The last time Mercury squared my Uranus I heard on the news, that day, that Christopher Dorner was now hiding in the mountains, which are a mere 20 minutes from where I live. That was a surprise, the whole day no one knew if he was still in the mountains or if he had left, and when something happens like that, you want it out of your area.