Astrology of Bela Guttmann and the curse on Benfica

Yesterday Benfica didn't win. Was it, because Sevilla was better? Or...was it because of Bela Guttmann's curse? This question pops up in the newspapers and so I had a look at the chart of the man who is said to be the reason why Benfica can't be Number One. 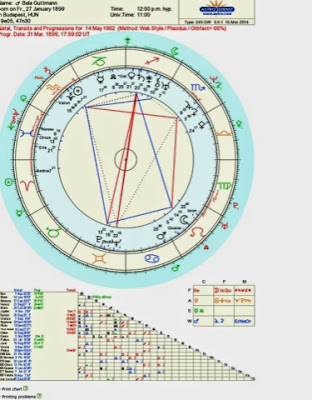 Bela Guttmann was born in 1899, in Budapest (Hungary). Here you see the chart (without hour of birth) of a celebrated ambitious (Saturn rising before Sun and Venus) very fiery and  driven (Mars is "calling" - NA- and Out of Bounds) coach of Portugal, the team of the European Cup Final 1962. He won! Then he asked for a raise. They bluntly said no.

That was in the days of transit Pluto inconjunct his sun.
Imagine: you are a winner (Sun-Pluto) but (inconjunct) they don't seem to appreciate it. He was underestimated.

So he was out of balance (inconjunct), stressed (Pluto) and angry at any possible level (Mars "calling"). Also Jupiter was sesquisquare Mars for success, the progressed Sun was 105 degrees from Mars (so he was even more driven than ever).

He said that Benfica would never ever win a European Cup again. For ever and ever? Benfica was born February 28, 1904. The natal Sun is trine Guttmann's Jupiter (that is supportive) and a square from Nessus (wrath after death Nessus). Wonder what is stronger...in the end. Maybe if Benfica stops believing the curse story, they have a chance:)...

http://astromarkt.net/nessus-astrology.html On Nessus, with links to examples like the transit Nessus opposition Sun of Quadhafi (Khadafi):
http://astropost.blogspot.nl/2011/02/nessus-now-opposition-progressed-sun.html

Nice article! thanks for sharing your opinion. Author is telling us. When Planets are move their position then we affected by them.
www.aghoritantrikbaba.com/get-lost-love-back