Chart of the final message of the crashed flight 447

The cause of the accident with the Air France flight 447 of June 1 2009 remains a mystery up to now. The black boxes might be lost. It is also not known where and when exactly the crash took place. Without an exact time and place of the moment of the crash of the Air France flight 447 we don't know the exact cross point of horizon and meridian. That means that we don't know the exact crucial astrological indications that accompanied the moment of the crash. It is estimated that the plane was at about 30d West and 4d North. The last message received was at 2:14 GMT. That is not enough information for a complete event chart. However, there are some global indications for the region in the minutes of the final signal received from the plain. They point at a combination of an unclear situation and failing instruments or machinery.

Here is the chart. I highlighted the tragic combination of Uranus and Neptune on the horizon with Saturn and Vulcan squaring Midheaven, together with Mars just as far from Saturn as from Midheaven. 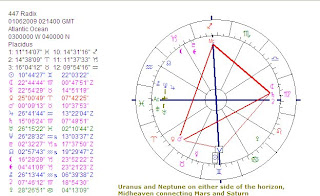 So: the combination of Mars and Saturn is crucial for the time and place and has a crucial place in the chart of the final automatic message. The combination of Mars and Saturn points at lack of energy, end of motion and restricted action. The last minutes of the Air France Flight number 447 were characterized by the most difficult planets available... Unfortunately sometimes difficult and dangerous circumstances coincide with a difficult event chart. Most often accidents occur due to a combination of incidents that eventually lead to a crash. Crashes usually don't happen with perfect machines and in perfectly good weather conditions. But they can happen any time when bad conditions of the weather, the machine and the instruments go together. The event chart shows a difficult situation. The weather or machinery conditions did the rest.