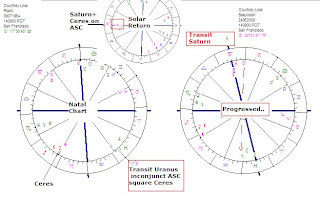 Courtney Love is looking skinner than ever, see report with pictures on Daily Mail. This is rather strange, since she has transit Jupiter trine Ascendant. That is supposed to make you GAIN weight and that someone will be helping you (or give good advice). Perhaps she in the hands of a proper dietist right now? Let us hope that help really is on the way, because the pictures show that she needs to eat asap or that she suffers from a disease.

GETTING SKINNY
Getting skinny is a proces. It started, according to the Daily Mail, in 2006. Before she looked gorgious (' curvaceous', says the Daily Mail). What happened since then? She stopped using drugs and gained weight. In her chart there were 3 signs of changing times and Saturn (ruler of the bones) was square her Ascendant. Saturn's aspects tell us that there is a need to control, restrict and limit. But not to starve yourself (I hope).

Today transit Uranus is square the prominent Ceres (symbol of nutrition), activating the combination of Ceres and Uranus with Sun/Moon in her natal chart AND now inconjunct her Ascendant. This reflects the upheavel about her diet and appearance, perfectly!

CHANGES (3x)
The three signs of changing times were:
1. Her progressed Sun started to change sign from Leo to Virgo for another lifestyle.
2. Her Ascendant moved from Scorpio to Sagittarius, so that her appearance changed.
3. Progressed Midheaven conjunct Pluto (natal and progressive). Pluto reflects the come back and transformation.

When there are 3 or more indications in the same direction, there is almost a certainty that the issue that is being indicated will be very important. Here we see 'the rule of three' (three indications at the time). And all three say that there is a transformation taking place.

2. Last April there was a progressive square between Ascendant and skinny Saturn. And finally transit Saturn is conjunct her progressed Midheaven right now. Perhaps now she realizes that she is too skinny after all.

3. Transit Saturn is also conjunct the Ascendant of the solar return of 2009, if she is celebrating her birthday in San Francisco.

Another indication: Ceres is on the solar return chart Ascendant, with Saturn!...

CERES 'CALLING'
Transit Uranus is inconjunct her Ascendant for disproportionate upheavel about her appearance. Courtney is fond of upheavel. She has Uranus semi square with Sun/Moon and 157.5 (sesquisquare and half semi square) ...Ceres, the symbol of nutrition. What a coincidence! You would almost start believing that astrology works;)

Ceres is not making aspects in sign or orb 5 degrees in the chart of Courtney Love. In other words, Ceres is 'calling'. That means that nutrition is out of control or that nutrition is important at any possible level.

As Uranus is reflecting the flashlight relationship, I am afraid that there will such a relationship whit food and diet. Transit Uranus is right now exactly square Courtney Love's natal Ceres, activating the combination in her natal chart. And that is another reason why her diet causes such upheavel.

ARTIST
Courtney Love's natal chart shows the astrological pattern of artistic talent. You can read about that on Art&Astrology.


PS
For more information about Ceres, see the post about the dwarf planet that is prominent in the charts of cooks, female icons (...) and whenever agriculture, seeds, roots, dynasties or genes and...nutrition are involved. Just click 'Ceres' on the label below this message.