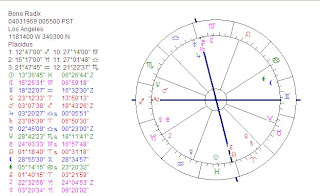 Recently I wrote about the signs of changing times. Chastity Bono is now about to transform into Chas Bono. What signs of strong change are there in her chart right now? I see at least four of them:

1. In a few month times the progressed Sun will be inconjunct Pluto for a disproportionate and perhaps difficult transformation.
2. Transit Uranus is opposition her natal Midheaven for upheavel.
3. Sun and Moon are on the angles of the solar return chart for this year, indicating crucial changes regarding fysical health, style and manners, presentation and condition.
4. Transit Pluto square Uranus promisses revolutionary change.

Pluto is very important in her natal chart. Pluto is conjunct Midheaven. That means that her condition and position is strongly related to issues of life and death, money, power, politics and sexuality. Pluto is also a symbol of transformation...
Mars is the first outer planet rising before her Sun. The political (Pluto) activism (Mars) is clearly indicated. Pluto is inconjunct the Venus-Saturn conjunction, pointing at a possible serious hormonal problem.

It must be hard to change your life in such a drastic manner, with operations, chemistry and the pain. The combination of the transit of Neptune inconjunct Midheaven and the up coming transit of Saturn conjunct Midheaven could indicate hospitalization. But, the fact that Chas lives in an artists' and unconventional environment with enough money to make the best of it will hopefully help.

Meanwhile her mother (Cher Bono Allman) has the progressive Sun in the final degree of Cancer. Last year she had Sun conjunct Saturn and worried about her son (see the post involved). Is it the Moon inconjunct Uranus that causes upheavel about her family? Or would it be the 'calling'*) Black Moon Lilith in the fifth house? According to Lilith Tribe the fifth house position of Lilith makes motherhood uneasy...

*)Calling: no major aspects in sign and/or in orb 5 degrees. The effect is that the calling planet manifests at any possible level, strongly. Black Moon Lilith in the 5th house, calling, would strongly manifest the nature of Black Moon Lilith in 5th house affairs such as children, play and entertainment.