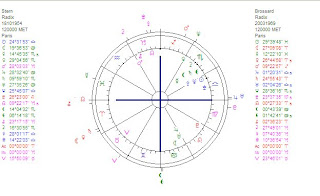 On Astrologie.blogo.nl I found the day of birth of Cecile Brossard. She is risking 11 years of prison now, after killing her very rich friend, banker Edouard Stern, after a SM-game. She shot him four times when he called her an expansive whore. She was born on March 20, 1969 in Paris with an oriental Mars. That tells us that she acts first (maybe talks later)...

SHARING DEADLY DANGER
In earlier posts I demonstrated how murderers and victims seem to share the same aspect of Mars-Saturn or Mars-Pluto (also see the article about Mars-Pluto on my site Astromarkt). When a couple shares difficult aspects between Mars and Pluto, often the use or abuse of violence is an issue in the relationship. Cecile Brossard says that Edourd Stern humilated and hurt her, also when the SM-game was over. The issue of deadly danger is an issue in both charts:
- Her Mars, rising before the Sun, is sesquisquare Saturn and 75 degrees from Pluto
- His Mars in Capricorn (ruled by Saturn) is inconjunct Pluto, rising before the Sun. His Pluto is 112.5 degrees from Mars/Saturn. And 112.5 degrees (square and half semi square) form her Mars! So: their oriental planets were connected to each other and the combination of these planets means 'using violence'.

When two people with that theme of Mars-Saturn-Pluto in their charts meet, there is a double risk of sexual violence and murder. They shared the combination of using and abusing power, force, influence and strength.(Mars-Pluto).

MATCH
Did they match? Not at all. They understood each other (Mercury trine Mercury), but they had a different lifestyle (Sun), they had different habits (Moon) and they had different tastes (Venus). They did not even match in sexual cooperation (Mars). Notice that his Jupiter is trine his Sun (for trust) and her Saturn is opposition his Sun (for separation and distance and in this case: for ending - Saturn - his life - Sun-). And last but not least, her Pluto is semi sextile his Sun. Her power over his life was not in balance. But there was also... love and passion.

This is THE combination of a passionate love affair. Maybe one day someone makes a movie aboutthe couple or someone writes a book about their unusual, violent and in the end deadly relationship.

PS
If she has the Moon between 21 and 26 degrees (and was born between midnight and 8 in the morning) her Moon is inconjunct Pluto. That is a difficult emotional and psychological aspect. Find out more about this combination of aspects that sometimes includes seeing submission as a way to express love...

Would it be possible to have the time of birth for the 2 charts please?