Losers and winners of the battle of Waterloo

This post is about Mars-Pluto and the Battle of Waterloo (June 18, 1815), with the charts of Napoleon (with hour of birth), Wellington and Von Blücher. 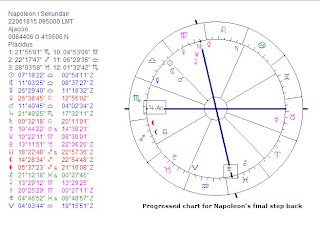 NAPOLEON
The timing of the battle of Waterloo (Belgium) on June 18, 1815 seemed to have been alright for Napoleon. He had a progressed chart with Jupiter on the Ascendant! Fact is, that he WAS supported and managed to raise an army of followers. But, (and astrologers of those days didn't have a clue about that), there was a difficult aspect with Pluto, inconjunct his Sun, reflecting a will to win at all costs, and the price to pay for it... And transit Uranus was square his progressed Midheaven. It was time for a dramatic and unexpected change. 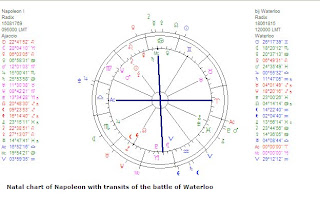 Fact is that shortly before the battle Mars had been conjunct Pluto. As Mars is the symbol of the military and war and Pluto symbolizes force and intensity, the chart perfectly reflects a heavy battle. Mars and Pluto had been inconjunct the natal Sun of Napoleon not long before the battle. The combination forced him (Pluto) to defend himself (Mars-Pluto) in a disproportionate way. A whole army indeed is rather disproportionate!;) Napoleon had a tight Mars trine Pluto in his natal chart (but he didn't know about it, of course). So the transits activated an existing planet combination in the natal chart. That increases the effect! In the progressed chart of Napoleon Mars is approaching a square with Pluto. That shows us that he had to keep on defending himself AFTER the battle (...).

Before and after the battle transit Uranus had been square Napoleon's progressed Midheaven, showing unpleasant changes in his position.
Napoleon had tow aspects of changing times (Uranus with MC, Pluto with Sun; a revolution going on). Jupiter was on his site. But the enemies were stronger (Pluto).

WELLINGTON
There is no hour of birth available for the Duke of Wellington. But we know that transit Saturn was square the natal Sun of the Duke of Wellington, the man who succeeded in defeating the army of Napoleon (with the help of the armies of several nations, of course). Had there been an astrologer around, would he have thought that Wellesley would win the battle with this transit? Wellington had a great responsibility. It was a heavy day. The troops of Wellington had lost, if the Prussian army had not come for their help. 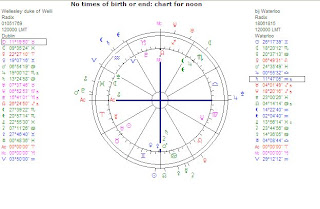 VON BLÜCHER
Von Blücher, the Prussian general, had Sun in Sagittarius and Moon in Leo and he was known for his fiery character. The Mars-Pluto conjunction of Waterloo is exactly square Von Blücher's natal Sun. It is a day for a battle to win, a challenge. Also his progressed Mars is quindecile transit Pluto for a very strong focus on winning a battle! The Mars-Pluto quintile in the natal chart offers the possibility of a creative way to win a battle! The Mars-Pluto conjunction of the day of the battle challenged him like it challenged Napoleon. 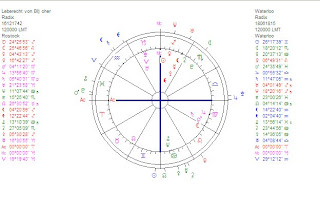 HERO AND LOSER
On June 22nd Napoleon stepped back and gave up, entering the final years of his life with transit Pluto inconjunct Sun (for surviving, but...), transit Saturn square Uranus (he lost his freedom again) and inconjunct Mars (for the end of the battle and the energy). Both winners of the battle had a progressed Sun trine (progressed) Neptune in the year to come. Perhaps THAT is demonstrating 'being the hero' (being seen in an idealistic light)?

(PS Is it just coincidence that Blücher's first rising outer planet is Pluto and Wellington's is Uranus? And that Napoleon had to deal with transits of Uranus and Pluto?)