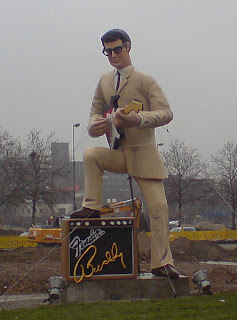 Buddy Holly was one of the earliest pop idols and born on September 7, 1936. He died, too young, in an air crash. This blog is about his chart, transits and progressions.

MARS+URANUS: Hurry
There are indications for possible accidents in the natal chart. Transits resonated those indications on his final day, when he was in a hurry, on tour, and decided to take a plane instead of a (slow and old) bus.
Mars and Uranus are the combination of the 'short fuse' and accelerates speed. In the chart of Buddy Holly, Mars and Uranus are prominent. Here is the chart (transits and progressions for the day of his death):

1. Mars
Mars rises before his Sun, is in the 8th house and rules the 4th house.
Mars is inconjunct Saturn (ruler 1)

2. Uranus is 'calling' (not making major aspects in sign or orb 5 degrees).
Uranus is square Mars/Pluto.

MARS-SATURN
A besides about Mars-Saturn: I recently 'survived' transit Saturn inconjunct Progressed Mars. My Mars is 'calling' (my progressed Mars is not). It have been days of a tetanus injection and antibiotics because of infection, and I have seen the doctor more than once, but I didn't die (obviously:). More important: nobody in my family died. Mars and Saturn are trine in my chart (out of sign). They are not related to the 4th or 8th house.

I quote Art&Astrology (blog about the talent in the chart):

On the day of his death, transit Saturn was sesquisquare his Mars (frustrating end of energy) and at the moment of the crash transit Uranus was 75 degrees from his midheaven (a shock), with transit Neptune septile Sun and biquintile Moon (perhaps unconsciousness). These are not uncommon aspects. But in HIS chart Mars happened to be an important symbol of death, being activated too soon.

DEATH
Here above is the chart of Buddy Holly, with transits and progressions for the final day. There are a number of tight aspects. Some are an indication of what happened. We see Mars-Saturn (dead end), 8th house (life and death) and 4th house. Three of those tight aspects are related to the 8th house. Two of them to the 4th house. Mars-Saturn is already indicating a possible end of energy. The combination of Pluto, Mars and Saturn shows the danger of death. There are 4 aspects between planets, lights or objects making aspects in the natal chart, too. Those are strong aspects.

Big events take at leats 3 or more important transits and progressions. Accidents are most often complicated and caused by more than 1 simple mistake or failure. As you see, it takes a lot of transits and progressions to mark the end of the life of a 22 year old artist...And there are at least 4 strong indications of danger. The 3 inconjunctions complete the picture of loss. Here is the list.

PHOLUS
One more thing: Pholus is on the Ascendant in the natal chart and Pholus is novile the Midheaven. The midpoint AC/MC is semi square Pholus. Pholus is the symbol of the turning point. He had a turbulent and short life. But he is also a legend. On Astromarkt I wrote about AC/MC with Pholus:
The importance of polls, looking back and retrospective results

He had a contract in 1956 (transit Neptune conjunct Midheaven and Progressed Sun soon conjunct Venus, progressed Midheaven square Mars, Progressed Ascendant inconjunct Mars and almost opposition Uranus). The prominent Mars and Uranus were 'hit', just like when he died on tour in 1959. Here is the chart, transits and progressions of Buddy Holly for January 1956.

Also visit: Astromarkt.net For example about Pholus: http://www.astromarkt.net/index.php?id=100 or about Mars-Saturn

And see this about the legacy of Buddy Holly (still alive after 50 years):
http://www.armytimes.com/entertainment/music/gns_music_buddyholly_012909/