Jacqueline Bouvier, chart of a widow 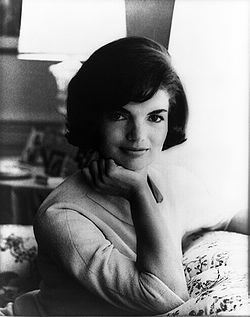 Following my tweet about Jacky Kennedy's chart and the publication of interviews with the former First Lady, here is the Astro.com A-rated chart with transits and progressions for today and a story about the widow in her chart.


I included Juno (close to her Ascendant, like in the charts of Prince Albert and George Clooney). In a female's chart Juno's angularity might point at the importance of 'being someone's wife'.

JUNO AND 7th HOUSE
Maybe it is because of Juno on the Ascendant that we know Jacqueline Kennedy mostly because of her marriages:  the first with John F. Kennedy and later with Aristoteles Onassis (see post about him and Maria Callas. The importance of marriage is also visible in the seventh house, with Jupiter (an important signal for both 'the international' and 'more than one or once'...), Ceres (symbol of motherhood and dynasties) and Orcus, the symbol of broken promises.

TWO MARRIAGES AND NO DIVORCE
Jacqueline Kennedy married twice. We see Venus in Gemini, opposition Saturn. It is a contradictio in terminis.

Venus, symbol of love, is in a double bodied sign (and that says: more than once, see that post...).

Saturn, however, tends to stick to a love like a stamp to a letter.

With Venus-Saturn there are responsibilities, mortgages, children and parents to consider when love has ended and it will be hard to separate. Material things are important in a Venus-Saturn marriage.
Also, Pluto rising before her natal Sun tells us about the importance of power, influence, politics, values and the persons that you know. She had a relationship when she met JFK, with a man who didn't make enough money in her mother's eyes. It was on her mother's advice, they say, that she stopped seeing her fiancé. Venus-Saturn*): men with such an aspect are (more than women) untrue in such a dead marriage (or should I say: a love commitment with duties and obligations).

Jackie Kennedy had a husband who cheated on her and her second husband also wasn't true. But in the interviews she mentions the faults and mistakes of M.L. King and General De Gaulle and L.B. Johnson...Maybe it was too soon after the death of her husband to even slightly mention it (he was an idol!). Did she really not know about her husband's sexual adventures? There are a number of astrological reasons why she would never mention them.

1.  Venus-Saturn will do anything to keep up appearances in marriage.
2.  Neptune on Midheaven might help her to see the world from an idealistic or romantic point of view.
3. And all those trines and sextiles tend to prefer the easy way out instead of nasty processes as a divorce.
4. Even more important is the Northern Node opposition Ascendant and Juno. That strongly connects her situation and relationships to the family and the larger community. Her relationships and marriages were important for more persons that just herself...
5. Circumstances, gender, situation, culture
She was rather conservative and the sixties hadn't roared, yet, when she was married with JFK. Ladies were supposed not to see their husbands' mistresses and prostitutes at the time.

There are numbers of reasons why women don't divorce their unfaithful husbands. In her natal chart we don't see the usual 3 ' suspects' (indications for divorce): afflictions of Sun-Mars, Sun-Uranus and Venus-Uranus, either.

TWO TIMES A WIDOW
It must have been painful, just as watching her husband's violent dead. Perhaps that is the meaning of Chiron conjunct the Descendant...She became a widow twice.

BTW I just 'discovered' that the symbol of the turning point (and change), Pholus, is quindecile (165d, symbol of obsession and focus) the Sun/Moon midpoint of marriage and square Aries Point. Does that mean a strong focus on family life and the risk of the experience of important turning points in that family life?

DEATHS OF HUSBANDS
On November 22, 1963 transit Saturn was almost exactly square her natal Ascendant/Descendant. That is when her first husband died, a few months after her two day old son died. It was a hard year for her.

Here are the charts of both important moments (death of JFK and death of Onassis).