Living with astrology (and EC 2012 football)

One of the comments on this blog was about relying on astrology for 'every move'.  I started this post explaining how I use or don't use astrology, in a sort of a defense and I ended with football. Astrology is one of the ways to advice myself. I don't rely on astrology for 'every move' that I make. It is an extra. Astrology in itself doesn't create limitations or wipe out free will (unless you decide to do as your astrologer tells you to do, in which case you gave away control. That is not astrology's fault).  Astrology is not an island. Charts are interactive. Astrology is interaction between individuals, situations and charts. It is like football!

Football is a game, a match between teams. You can't win the pool simply by calculating the sum of brilliant players and a respected coach. You need to know the same about the other team. You also need to know conditions of teams and weather. And how to calculate surprising chances? That is why you can't win the pool always.  You can bet on it, but you will never know for sure. If you knew beforehand, you wouldn't have to play the game at all.
A natal chart is the reflection of a character. You need to know gender, genes, social conditions, culture and even more to really completely know about the person who was born with this chart. You won't be able to predict exactly what a person will do on a certain day and you can't decide for this person, based upon the chart only. You can only speculate with a certain percentage of accuracy. People are people and they are as unpredictable as the weather is.

There are posts about football and astrology on this blog, written during EC's.  In those posts I used the final moment of the match to see which coach was more pleased or down. Or better: I checked the positions of the natal chart of the coaches to see if and what kind of aspect the actual MC of the final moment made with their natal positions. I evaluated the results and found it a rather interesting method to see who had the best chance to be the winner (if you are sure that the coach wants to win). This time I didn't have the time to check them all. But tonight there is an important Portugal-Netherlands and yesterday a Dutch coach was involved in Greece-Russia. So I couldn't resist the ephemeris and this is what I found, using the chart of the final moment. 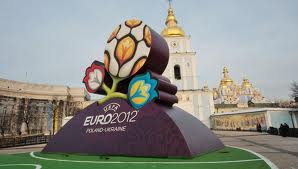 Greece-Russia
The times of football games are chosen by officials, not by the coaches. One of the two teams have to win (unless they play even). Yesterday the Greek won and Russia lost. The final moment was a few minutes and seconds after 20:30 Greenwich Time (22:30 MET).

Fernando Santos was born 10th October 1954 in Lisbon.  He coaches the Greek team. Santos Jupiter and Uranus 'responded' to the horizon (Ascendant-Descendant) shortly after transit Ascendant inconjunct Pluto. The stress was almost too much, but once the referee whistled, there was relief. At the official final moment Midheaven was square Pluto: a position of value had been reached. Greece was back! (Pluto-MC is reflecting a come back with stress)

Dick Advocaaat was born September 27, 1947 in the Netherlands. He had a nervous day of tension (transit Sun conjunct his Uranus) and at the final moment transit Midheaven was inconjunct Uranus. Inconjunctions don't promise a victory. They are about loss and losing balance (see Astromarkt). A surprising (Uranus) loss (in conjunct) as a result (MC): disqualified.

Portugal-Netherlands
Tonight The Netherlands have to win with at least 2 more goals than Portugal and only if Germany wins, too, the Dutch team won't have to go back to Holland. Chances are low and they have a considerable risk of disqualification.
They play against a team with a coach (Paolo Bento, born June 20 1969) who has a Sun-transit Jupiter day today (a lucky day) and at the final moment you see some content (Transit MC inconjunct his Venus).  He might loose and still be pleased.

The Dutch coach Van Marwijk however has the same kind of aspect that Dick Advocaat had the night before: Transit MC inconjunct Uranus. Now what will the result be? We will soon know if transit MC in conjunct Uranus really means disqualification. That could happen even with a 0-1 or a 0-2 (if Germany looses).

This is not a prediction. This is the analysis of a moment in time and the interaction of that moment with natal positions of coaches. This interaction might mirror their response to the results of the match. I used it in 2008 and it worked. Let us see about 2012:).

Coaches can't avoid a moment or a date of a game. If you can, do you check your ephemeris? And what is your opinion about that? Is it acceptable to take the chart's positions into account for important decisions? Do the poll!


All former EC posts and post about the Midheaven as indication for a result
http://astropost.blogspot.nl/search/label/EC%20astrology

I always use astrology when I make appointments for the dentist, or for getting my hair done or mailing in my taxes. It's impossible to use it for every move we make, but I do use it for all the important moves. Even shopping for clothes. Grocery shopping not so much, although I do notice that when the moon is void the product I really want is not usually in stock.

Thanks for your comments! I'll mind Venus trine Sun for the final and maybe won't start looking for shoes wth void Moon. i wonder how Void Moon works out for sale figures...

In sports astrology I followed J.Frawley method and now I have dicovered that Frawley's system is a bit askew, so need a rework