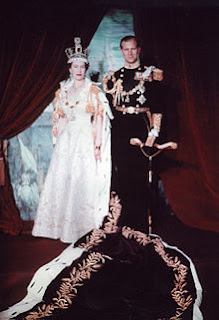 For those who are fond of reading about royalty, I proudly present the chart of the Queen of England. Almost no monarch ever reigned longer than she did (Queen Victoria still 'beats' her). On June 2, 2013 she will have reigned for 60 years! She has the right genes, and she has the perfect chart for a queen. Why?

1. Her Sun doesn't make any major aspect in sign, in the very first degree of Taurus  that is a statement for drawing attention at any kind of level, like super stars or leaders do.
2. Saturn has a prominent position on her MC. It means that her father, parenta, status, ambitions, duties and age matter.
3. The Leo Moon is almost to perfect to be true, because Leo is a royal sign and the moon the symbol of females. There we have a queen!

What I like i  this chart, is Mars square Saturn. It is the aspect of discipline and we all know that she has a sort of a military way to do her duty, disregarding pain or bad times.

But, transit Saturn is now square her progresssed Sun, while celebrating the 60th aniversary of being the queen, the longest reigning monarch ever. Maybe it is now that she feels her age, the end of a period in life, the load to carry? It looks like  a shadow hanging over the party or is it just the weight of a milestone? She became the queenwhen her father died, with progressed Sun opposition Saturn. Within 1,5 years her progressed Sun will be trine Saturn, mission completed, being respected and having self respect. With such an important Saturn in the natal chart the transits and progressions of Saturn will be important, too. 60 years is a long time, a respectable time.  If you wonder why they start celebrating this a year ahead instead of after completing the full 60 years after coronation...The King (her father) died on February 6, 1952. She was proclaimed queen on that day.

Oh well, long live the Queen! Here is the chart for the 60th birthday of her coronation, followed by the chart for 60 years ago (June 2, 1953, Coronation day). I notice that there is a Transit Neptune square Ascendant  aspect. Neptune-Ascendant transits or progressions also show up in the coronation charts of the Dutch royal family, if I remember this correctly. Is it about decorum and rituals, I wonder?

LINKS
Read about the interaction between the charts of Prince William and his grandmother: http://astropost.blogspot.com/2008/06/synergy-of-prince-william-and-queen.html

Read about the marriage og Victoria and Albert on Astrology&Love

Or use the label Royalty
Also visit: Astromarkt.net All rights reserved
Geplaatst door Astromarkt op 12:00 AM