The chart of Mick Jagger is an A-rated chart of Astrodienst. Here it is, with transits and progressions for  July 12, 1962, the first day of the Rolling Stones.

If I didn't know whose natal chart this was, I'd start with the Astro ID and see the importance of ambition (Saturn), drawing attention (Sun) and...the importance of artistic talents (Moon, Venus, Neptune). Because:

In the autumn of 1963 Mick Jagger stopped Economy school (Progressed Sun sextile Saturn), because at that moment the Rolling Stones were already very popular. He became a professional artist. 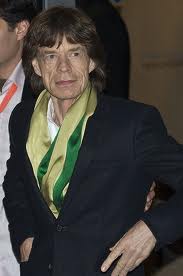 I could tell a lot more about his transits and progressions during the years of his life, but who would be interested? There are more interesting objects of study. For example: Mick Jagger is also known for the amount of women that he shared his bed with. Among them: Marianne Faithfull, Margaret Trudeau, Mackenzie Phillips, Carla Bruni and Angelina Jolie. He has 7 children of 4 women and married twice. Where are all those women in his chart?

TOUR?
Now and in the next period of time, the transit of Uranus and Pluto will hit the progressed Sun, Midheaven/IC and natal Moon of Mick Jagger and probably cause upheaval. In fact, it has already begun.  He is under pressure and there are a lot of speculations (Transit Neptune inconjunct his natal Sun) about a final tour. It is a hype that causes stress, mixed emotions and nerves.
Stage fright? Still?

LINK
They say that Mick Jagger even had more women than Casanova had. Casanova was a completely different kind of person. If you want to see his chart and read about him, just click.

About Keith Richard on this blog