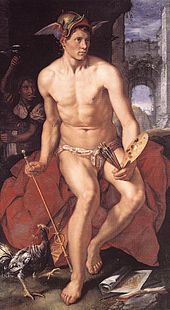 
Mercury without Ptolemaic aspects in sign (orb 5 degrees) is good for writing instructions and speeches, for press bulletins and for twitter (a lot of tweets, little interaction). But if your Mercury is 'calling' you might 'just' be instructive, always hanging on the phone, the messenger of the family, communicating with the neighbors and yet: not a writer. Mercury has to contact Midheaven somehow.

I wrote about Mercury 'calling' before: http://astropost.blogspot.nl/2010/06/mercury-calling.html And I have to tell you now, that any not aspected part of the chart does what the symbol says that it does, at any possible level, somehow, anyhow. At any possible level: that means that there is a zero level, too. With Mars 'calling' you may be a workaholic, but one day you wake up without energy. With Venus 'calling' you may be charming and funny, but one day you are not nice or popular at all. If Saturn calls you, you start climbing, but you might find yourself back down in the valley when you fall. Calling planets tend to extremes. Most of the time the not aspected planet functions at a very high level. Mercury 'calling' is an excellent communicator. But sometimes it is hard to reason with them, if only because you don't get any contact...

Early August 2012 Mercury will be 'calling' in Leo, except for the morning of the 2nd of August (when there is an opposition with the Aquarian Moon). On August 4, 2012 many French workers start their holidays and will try to reach their summer location. It might be even harder to get there in time, than usual. The 'calling' Mercury will make an issue of 'transportation', complicated by an inconjunct of Neptune. So if you go: prepare for traffic jams until the weekend of the 18th of August or use the flow of Monday 6 or Saturday 11 (when the Moon is trine or sextile Mercury or Jupiter).  If you can't avoid the traffic jam, see where Mercury is in your individual chart. Perhaps your car is the lucky car that arrives in time:).


Also visit: Astromarkt.net  for example about
not aspected planets and elements without placements
or about Mercury and lying

See Wikipedia about the mythical Mercury (also God of commerce and... thieves)
Now I wonder: can a 'calling' Mercury tell lies and tales, at any possible level, too? I'll be back on this subject.