A medium is a communication channel. There are all kinds of media. Psychics, data carriers, and news media. I made the promise to explain why Neptune is about (for example) fiction AND about (news) media. 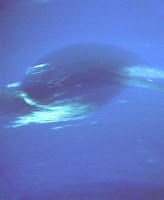 ARGUMENTS
Fiction
It is not surprising that Neptune is connected with news media, when you know that Neptune is the symbol of all that is unreal, like photographs (we see a picture, not the real persons), like on television (we can't touch these people), on Facebook (is that profile real?). Neptune is there where fantasy, imagination, empathy, vision or belief is required. Or a good 'nose' (like with perfume or gasses).

When pictures and music compose a drama around a fact, Neptune is around. Today's media are full of Neptune. And we consume it and add are own ideology, emotions or beliefs to what we see.
Neptune is also there, when there is gossip. There is a fact (10 people died) and there is the gossip. (Neighbours say that the driver was an alcoholic, but his family says that he certainly was not). You remember the alcohol. (You won't be surprised to see Mercury in conflict with Neptune in the charts of those who mix facts with 'stories' ).


Associated Press and Neptune in Pisces
Neptune recently moved to Pisces and is strong now in own sign, just like in 1848 when Associated Press started. Now we use more and more mass media. We are being absorbed by a sea of colors and by pictures and music, working together to produce a fantasy or a message that you can believe in. They sort of shape our picture of the world outside. Some people try to look like the illusionary persons that they watch on television, but they will fail to be as good looking as they are, because these persons are fake (a composition of the best parts of a variety of persons).

Negative press (or creating idols) and Neptune
When there is negative press about a celebrity, and we study the chart, we often see the transits or progressions with Neptune. The other side is the creation of an idol (sometimes with the purpose to make us fans or followers). An idol is a bit 'unreal', too. Gossip and worship have the same basic unreality and tend to end in bitter disappointment and disaster. The potential of Neptune to shape a world of fantasy and make us dream that we are part of it, can also be abused to destroy a person's reputation or to create a fake superman or superwoman.

For examples of the effect of Neptune in an individual's chart, see the links below, for example  to Astromarkt about Sun-Neptune aspect and the question: Am I who they say that I am?).

LINKS
Examples of scandal and bad press with transits of Neptune: http://astropost.blogspot.nl/2011/02/confusing-transits-of-neptune.html

About Neptune in Pisces in history: http://astromarkt.net/neptune-in-pisces.html

Scandal in the Vatican and Uranus-Neptune http://astropost.blogspot.nl/2010/04/uranus-neptune-scandalous-transits.html

Two artists and Neptune - gossip - in between: http://astropost.blogspot.nl/2008/04/neptune-and-how-it-works.html


Also visit: Astromarkt.net , for example about Sun-Neptune aspects in natal, transit and progressions

WOW this has just given a possible explanation to one of my not enjoyable experiences the last 12 months that didnt end well, but still has hope. I natally have neptune in 1st house trining my natal merxrx, I am incapable of lying, its like i have a neon light on my forehead that gave me away any time I tried, so gave up trying. Yet others often dont see me as I am. This reached a climax with my own biological family as neptune went through my 4th house, opposing a stellium and finally nth node in leo at the penultimate degree, where they in not a nice way told me what how they see me and think of me, which was a shock as they would be the only ones in my life who see me this way and the only ones who havent got to know me because they dont want to and choose to think therefore see me as they think I am, coming from their "own story" of trained beliefs, created by my sadly logically trapped pisces father. Needless to say when neptune conj south node at penultimate aqua, i refused to betray who i am or my personal beliefs after many years of healing and hard work to be avoid rejection by them and it didnt end nice, although I continue to be me and there are glimmers of hope which may take a while but once neptune builds towards my chiron at 5 pisces opposing my pluto, I am hopeful they will finally see me as I am and healing for them will be triggered, as they deserve good and happy lives also, but breaking through that illusion is what it will take. So thank you, that as i said, does clarify for me.

Hi Debby, sorry about the negative experience with T Neptune! Thank you for your comment, as it is a welcome addition that shows what Neptune transits might be mirroring.