The 'guess what' chart of a nobleman


This 'guess what' chart (without hour of birth) shows a pattern and tells us about the resonation of planets that we haven't even discovered, yet. The patterns: Saturn-Uranus and Uranus-Pluto and Mars-Neptune. Neptune, Uranus and Pluto were unknown to the 16th century astrologer or astronomer. But as you will see, they were there...Here is the chart.

The event date is June 15, 1568, at the beginning of the so called '80 years of war' of protestant Holland against catholic Spain..
The story is well known in my country (well, not everybody knows, but it is part of history). It is the story of two noblemen (Counts of towns in Holland). They were Roman Catholics and devoted to their religion. What do you think that happened on the specific day in the life of this Count?

A LITTLE HELP...
A. As always, it is important to have a look at the natal chart first. This man was born with Sun in Scorpio. Mars was rising before the Sun. That is typical for someone with a drive, someone who acts (first).
B. Watch the Saturn-Uranus combination and in particular Sun square Saturn! On this blog you find a lot of input about Saturn-Uranus combinations. The extent of it is on Astromarkt now: http://www.astromarkt.net/saturn-uranus.html
C. Think of the 16th century in Europe (or think of the Tudors ). Combine this with the nature of the natal chart and the transits and progressions.
D. Don't forget to have a look at the Uranus-Pluto story on Astromarkt to see what this combination means: http://www.astromarkt.net/uranus-pluto-history.html or read about the astrological signs of changing times: http://astropost.blogspot.nl/2009/06/astrological-signs-of-changing-times.html.
E. In the natal chart below you see Mars opposite Neptune. In the progressed chart of the event date, you see transit Neptune opposition progressed Mars. Followers of this blog know that I like to point at the special effect of the transit that is sort of repeating the natal aspect. It is not a faint resonation at all. The effect of such a transit or progression is stronger than all other transits or progressions.
F. I almost forgot to mention transit Saturn inconjunct Saturn. They say that it is a generational aspect, but this person has a tight Sun-Saturn square.

Mars opposition Neptune....Cafe Astrology says a true thing about this aspect, as you will see when you find out what happened.
"Your imagination is so powerful that it can be hard to trust your instincts. You easily imagine things going wrong, just as you easily fantasize about good things!"


What did this count do or what happened in the time that he had Progressed Sun conjunct Pluto and sesquisquare Uranus with transit Neptune opposition Progressed Mars?


You think it was pleasant or not? What is your idea about this combination in those days?
Here are a few possible solutions:
1. He chopped of the head of a rebel against Spain and he shouldn't have done that. Later he was found guilty of murder and he spent the rest of his life in his own prison.
2. He was arrested by the Duque de Alba and beheaded in spite of his loyalty to the church and the king of Spain.
3. He lost his freedom when he was forced to marry a Spanish Countess, Margarita de Alba.
4. He was asked to come to Brussel to see the Prince of Orange (William). William had him on trial for his loyalty to the Spanish king.
5. The Duque of Alba confiscated his property and he was forced to leave the country.

You probably will have a problem to select the exact answer, but I am sure that you will have a pretty good idea! You choose. Or you read the answer here on Wikipedia. This is the statue of the man: 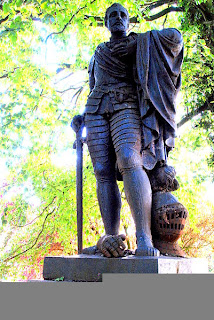