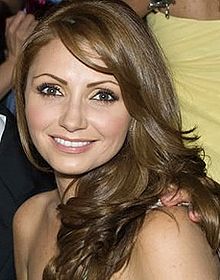 It is a very violent time in Mexico right now. There is a drug war going on with many murders. There is also a story about domestic violence at the top. They say that the wife of the man who won the 2012 elections is the victim of domestic violence and that she even had to spent time in hospital (in March) because he had beaten her up. Angelica Rivera (nick name 'La Gaviota') is a famous actress.

Here is her chart with transits (actual positions) and progressions (birthday + one day for one year):

Watch the Mars-Pluto combination:
- natal Mars semi square Pluto
- transit Pluto inconjunct Mars
When a transit is between planets that make an aspect in the natal chart, this transit has a strong effect.
Mars-Pluto is a brutal combination. Pluto always intensifies. Mars is the symbol of drive, action and aggression.

I've written a lot about Mars-Pluto here and on Astromarkt.  It isn't an easy aspect to deal with. It is in the charts of violent men/women and their victims. And it is in the chart of those who deal with competition and who simply want to win. That is why I need to mention that the story about the abuse turned up right before the elections. The opposition doesn't accept the results of the elections. There was an intense competition (Mars-Pluto)! On December 1 the presidency of Peña Nieto, the husband of La Goviata will begin.

SYNASTRY
The synastry chart of ' La Gaviota' and mr. President Elected has a Mars-Uranus interaction, just like between Dominque Strauss-Kahn and the chamber maid (see the post: http://astropost.blogspot.nl/2011/06/nafissatour-diallo-astrology-and-dsk.html )
There aren't many matches. Her Jupiter is 'with' his Sun and in synastry that is the theme of helping, support and protection. It is like in the synastry of Penelope Cruz and Javier Bardem (see that post: http://astrology-love-romance.blogspot.nl/2010/07/famous-couplesthe-jupiter-of-penelope.html )

Also visit: Astromarkt.net about Mars-Pluto, the drive to win...