In 2010 I wrote about Ahmadinejad (Iran) and Mars quindecile Pluto in his chart. Today I had a look at the natal positions of Elba Esther Gordillo, the Mexican union leader who has been arrested under suspicion of fraud. They say that she used part of the money for plastic surgery. Here is the picture: 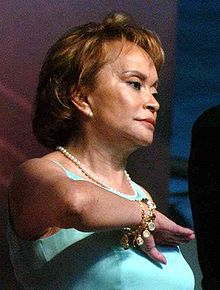 Her nickname is "La Maestra" and on the internet she is accused of "brujeria" (witchcraft and that included: watching her natal chart:)!

I wondered how an ordinary woman in Mexico could become so powerfull without a Mars-Pluto 'injection'. There is no major aspect between Mars and Pluto in her chart. But then I noticed the quindecile!

The 165 degree aspect that Noel Tyl (see his essay) called " quindecile" is the aspect of obsession and intensity. I first read about this aspect in Tyl's books and since then I found several good examples of how this aspect manifests itself (use this link).
The Mars-Pluto combination goes for winning and authority, sometimes by means of using violence, money power or other forces and strengths.
Connect these three and what you get is an overdrive of seeking power. Especially when Mars and/or Pluto have a prominent position, like in the chart of Gordillo (Mars rising before the Sun).

There is more in the chart than Mars quindecile Pluto. I see the "calling" Sun for leadership and drawing attention (being a star). Mars rising before the Sun focusses on action (sports, military), activism and on men or on what men use to do. Gordillo was born with a more than average drive and energy. Competition, taking the lead and dominating... That is Gordillo. And maybe Venus conjunct Eris makes discord and disagreement fun...

Mars makes another minor aspect: Mars is quatronovile Saturn. The 160 degree aspect is 4x novile and the meaning of the novile is 'to rejoyce'. Mars-Saturn is the combination of discipline and hard measures. Together, Mars quindecile Pluto and quatronovile Saturn, there is the hidden combinaton of unnatural death as an issue or a general theme in life. (Read the posts, see the links).

On the day that 'La Maestra' was born, the astrological positions didn't show a shy and weak person, on the contrary. I doubt that witchcraft was needed to make her a leading figure! But I am convinced that it took plastic surgery to shape her face. Just like in the charts of 'beauties' there are aspects between Venus, Saturn and Pluto. There is so much more to see in the chart of February 6, 1945! It was also the day of birth of Bob Marley (although Astrodienst gives an XX rated chart). He survived a murder attempt and died rather young (part of the issue of Mars-Saturn-Pluto?)

Here is the chart of her day of birth:

PS it is almost 5 years ago now that I was in Lisbon for a workshop with Noel Tyl, now. How time flies...

3. On the chart of Ahmadinejad, also Mars quindecile Pluto
http://astropost.blogspot.nl/2011/06/ahmadinejad-khamenei-and-eris-discord.html

6. Examples of Mars rising before the Sun
http://astropost.blogspot.nl/2009/04/mars-oriental-outer-planet-rising.html

7. Mars rises before the Sun and is 'calling' in the chart of Margareth Thatcher, too
http://astropost.blogspot.nl/2008/05/birth-chart-margareth-thatcher-her-son.html

and see the labels!
Geplaatst door Astromarkt op 10:59 AM