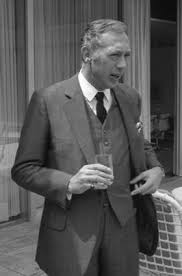 On April 25 this year it became known that the (late) popular actor Horst Tappert (Derrick on television) voluntarily joined the most cruel section of the Waffen SS during World War II. He had been hiding this fact all of his life, just like Gunter Grass. You know that Eris is the symbol of discord (and discord on a world wide scale means war)? The progressed Sun of Horst Tappert, in a new sign for just a few months, is inconjunct Eris.

In the years of the Second World War, Horst Tappert was around 20 years old and his progressed Sun was going to join Mars, the symbol of the warrior. In his natal chart, Mars is 'calling!' (no aspects in sign or orb 5 degrees) and that makes you think about the soldier in the chart of Tappert. However, he wore a gun in Derrick, too!

PS I said it before: with Sun quintile Neptune you will be able to create a 'double' life:)

LINK
For the actor in the chart, see my blog Art&Astrology:
http://art-astrology.blogspot.nl/2008/12/astrology-chart-horst-tappert.html