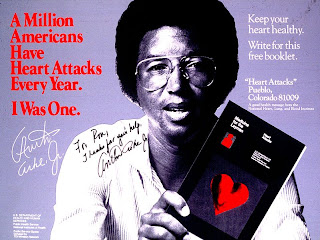 Arthur Ashe was born on July 10, 1943. He was a successful tennis player who unfortunately suffered from hereditary heart disease. He died because he became infected with AIDS when they operated him in 1979 and 1983.

NATAL CHART
His natal chart has Saturn rising before the Sun (pointing at ambition and the importance of parents and parenthood). This Saturn is exactly inconjunct Pholus in the 4th house and rules the 4th house of family matters. In the 8th house of death Uranus (surprise) is conjunct Ceres (genes). There is also Mars/Saturn midpoint semi square Descendant to show the issues of both discipline and death on the horizon.

It is no surprise that he wrote a book. Mercury is elevated and 'calling' (no major aspects in sign or orb 5 degrees), so communications is ringing.  Mercury is also important for tennis as Mercury rules the arms.

SURGERY, AIDS and MOON-SATURN
The surgery of 1979 (december 13) was with transit Saturn inconjunct progressed Moon and transit Neptune was square Progressed Venus*, natal ruler 1 and 8).
When he found out that he had AIDS transit Saturn was opposition progressed Moon. Saturn-Moon transits go together with nasty moments to remember. In line with the alarming message, transit Uranus was square his progressed Mercury in September 1988, when they told him.

Here you see natal with transits and progressions on December 13, 1979.