The chart for talking for hours (re: Wendy Davis) 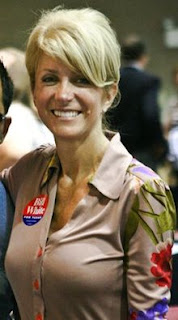 When I read that Wendy Davis talked for 11 hours in an attempt to stop the law against abortion in Florida, I wanted to know about her chart. Talking for so long is exceptional! What in her  chart indicates perseverance and communications, I wondered. So I produced her chart on Astro.com (without hour of birth) and I noticed that it is (again) a combination of skills, character and the right moment to show it.

1.  She has 5 to 6 positions in fixed signs. You know that the fixed signs (Taurus, Leo, Scorpio and Aquarius) are the signs of strong will and being determined? She has Sun, Mercury, Mars, Saturn and Neptune and possible also the Moon in fixed signs!  It means that she will not stop when she meets resistance.

2. Talking about communications is talking about Mercury. Mercury is in Taurus, widely square Saturn (orb 4d+), conjunct Sun and maybe square the Moon (depending on the hour of birth). Mercury is also biseptile (2x septile = 2x51.42=102.8) Pluto. The Mercury-Saturn-Pluto combination is the political combination of strategic talking. It definitely served a political goal to talk for hours!

3. Why now? She has transit Uranus square Progressed Sun and transit Pluto sesquisquare natal sun. The Uranus-Pluto combination is the combination of revolt and protest. Uranus-Sun often brings a person 'in the news' and hard aspects with Pluto show stress situations.
Moreover: transit Jupiter trine progressed Mercury helps you while communicating!

PS The chart of  the day of birth of Wendy Davis has Jupiter rising before the Sun and calling! (no major aspects in sign or orb 5 degrees). That is a statement of conviction, optimism, the international... at any possible level.  There is also a tough Mars opposite Saturn to deal with.

LINKS
1. On Saturn-Pluto combinations http://www.astromarkt.net/saturn-in-aspect-with-pluto.html Quote:
" Many politicians have Mercury, Saturn and Pluto combined in aspect or midpoint structure. Only a few of them don't."

3. Use the labels below to find more examples of fixed signs, Uranus Pluto and transit Jupiter.