The scandal in the chart of Weiner 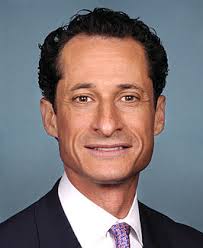 Anthony Weiner keeps coming back in the news and it is again about sex. I have mentioned Weiner in the post on Venus-Mars-Uranus combinations: http://astropost.blogspot.nl/2011/06/venus-mars-and-uranus-in-midpoint-and.html. I said:
Venus, Mars and Uranus together are the symbol of sudden passions and adventures or acting on impulse when attracted to someone.
His chart has Venus/Mars semi square Uranus, which is about as much as 'news -Uranus- on sex -Venus/Mars', but not always. There are always more reasons and more indications. There are a few things that 'catch the eye', like:

1. the position of the Sun between Uranus and Pluto
It is about dramatic and radical changes in life (see http://astropost.blogspot.nl/2010/02/radical-uranus-pluto.html ) Uranus+Pluto is 'ultra-'. Quote:


ULTRA…In times of conservatism, the Uranus-Pluto person might be ultra left. Today, when most of the western democracies seem to be operating on the originally left side of the political spectrum, the rebel (Uranus-Pluto) is often seen as ultra right. The controversial politician Geert Wilders lives in safe houses since the murder of Theo van Gogh. In his chart Uranus and Pluto rise before the Sun. Uranus and Pluto together often provoke the enemy and/or forces to or obliges a new life style.

So let's say: he is not the kind of guy to make it easy on himself when he makes choices.

2. Uranus rises before the Sun and Saturn is calling! (no major aspects in sign)
Saturn and Uranus are prominent in this chart. They are the combination of 'breaking free' and 'limited freedom' as an issue.

He is married. Above is the chart of his day of birth with (in green) the transits of the day of birth of is wife Huma Abedin (assistent of Hillary Clinton), who was born on July 27, 1976. The synastry of their charts shows a lot of holes.

a. Their sun signs don't match.
b. They share a Leo Moon. They may have the same kind of needs and habits, usually.
c. There is no aspect between their Venus. Perhaps there is a Venus-Ascendant connection (but as there is no hour of birth, that is a big ?).
d. Their Mars are in compatible signs. Her Mars is conjunct his Sun.  I wrote about the Mars-Sun synastry of the Dutch royal couple, title 'When Mars kicks you'. It is a little competitive, this synastry aspect. And yes, she has a top position in society.
e. His Neptune square her Venus is romantic, but could be disappointing, like all romance is.
f. They share Sun-Uranus aspects. His is conjunct, hers is square. I quote myself:

Sun and Uranus shared in aspect might indicate: joined rebellion. How long this will last in a proper family home in a suburb, especially when the aspect is hard? But in a group of inventive people or in a place where news items are made you certainly can go for ‘sensation’ together. This relationship could have an unusual start. Too much tension could lead to stress, even if the surprises are nice. Both being independent and willing to be free it will be hard to stay together as a couple. With harmonious aspects this tendency for doing things the way you want it, will be tempered and then your unique qualities come to the light, better than if you were alone.


Transit Neptune is now inconjunct her natal Sun and before that Saturn square her Sun. Those are difficult transits to deal with.  I just published an article on Sun inconjunct Neptune in the progressed chart. It is a very confusing aspect combination.

But there can be only one Anthony Weiner and only one such chart...


Also visit: Astromarkt.net for example on sharing aspects (that is when you and your lover have the same aspect combination): http://astromarkt.net/sharing-aspects.html