Chart of the day of the switched baby 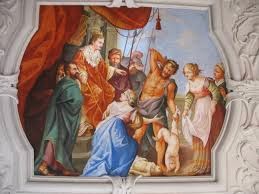 A 60 year old Dutchman, supposedly born on February 3, 1953 (2 days after the flood disaster in the Netherlands), finally got the confirmation of what he always thought. His DNA doesn't match the profile of DNA of his 'parents'. His mother once told him that he was switched in hospital (and switched back) and as he always thought that he was different, this story kept puzzling him. Soon after the death of his parents he wanted to know the truth. The hospital doesn't want to help him to find his true family, for privacy reasons. And so he remains 'different'.

In astrology Uranus is the symbol of alienation, being different and of sensational and surprising news. His chart covers the news.

2. Transit Saturn is inconjunct Sun and square progressed Sun  (end of a period, with loss of certainties)

3. Jupiter and Pholus are in aspect with progressed Mercury (turning point, being right, confirmation)

The real son of the family was perhaps born on the same day, or a couple of days sooner or later. Maybe the man involved was born on one of those days, instead. He has the same problem, but doesn't even know yet.
All others born on February 3, 1953 were probably given to the correct mother. They also have that Sun inconjunct Uranus aspect in their charts. The theme of alienation and/or being different than the rest might be the theme of their life and they all are or were confronted with that sooner or later in the period starting 6 months ago, more or less shocking, depending on their situation and on their time of birth.

I have some examples:
a.  http://en.wikipedia.org/wiki/Savvas_Tsitouridis (a politician who resigned two times after a scandal)
b. a football trainer in Germany (born in Yugoslavia)
c. an Austrian author

And not one of them was changed at birth...

PS James 'Whitey' Bulger, the brother of a USA democratic senator, was sentenced to 2 times life in jail + a few years for leading a murderous gang. He is in his 80s now. He was born with Sun exactly inconjunct Uranus and definitely not like the rest of the family.

Also visit: Astromarkt.net to see the links to the news on the subject in the related article: http://www.astromarkt.net/wisselkind.html