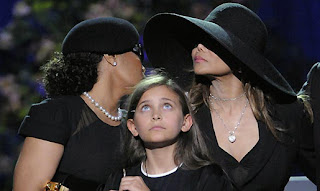 A few years ago I payed attention to Paris Jackson's dramatic chart and now that I read in the papers that her stay in a clinic probably will be prolonged for years, I had a look at the progressions, transits and natal of the child that lived with late Michael Jackson and doesn't even know who her biological father is.  She tried to commit suicide earlier this year and is now living in a therapeutic boarding school for some time. Does her chart show this? Yes, it does, certainly given her extraordinary circumstances.

ISSUES IN HER NATAL CHART
The combination of Mars-Saturn-Pluto (Mars tightly conjunct Saturn in 12 and sesquiquadrate Pluto) in the 8th house is a strong indication for the theme of untimely death and a danger for taking dramatic steps. This combination is dangerous. See the examples: http://astropost.blogspot.nl/search/label/Mars%20Saturn%20Pluto

After she tried to take her life, I mentioned the importance of this combination and concluded:


So, it is important to watch her carefully. She tends to drastic measures.


Moon inconjunct Uranus is the key to exceptional overreacting.


There is more about the Moon inconjunct Uranus. Moon inconjunct Uranus is also pointing at not being like the rest of the family (read this...). I think it also refers to alienation. In the case of Paris Jackson the mother was out of sight for years and the biological father is unknown. As an orphan she is now living far away from what she used to see as her family. This aspect must be harder for a Moon in Cancer with the need to belong and feel close.

UPCOMING TRANSITS AND PROGRESSIONS
1. Uranus-Pluto transits
Her natal Moon is at 10.66 Cancer. Her Sun is at 13.61 Aries. Mercury and MC are in the 19th of Aries and Capricorn.
With transit Uranus and transit Pluto hitting those degrees in the next years. First the Moon (again), then the Sun and later Mercury and Midheaven. There is also transit Uranus conjunct her Ascendant in May 2018, there is indeed a continuum of nervous challenges to be expected.

2. Progressed sun changing sign and later square Neptune
Her progressed Sun is at 28d59 Aries, moving to the next sign (Taurus), where the first important aspect will be the square with Neptune. When the progressed sun sign changes, life style changes, life itself changes, there are new prospects and with that: YOU change. It won't be easy in the next years, because Neptune confuses. With progressed MC conjunct Neptune she got out of the eyes of the public and with progressed Sun square Neptune it will be hard to fight disillusions and uncertainty. There is a sent of isolation with Neptune. As this all happens in the important period of the teenage years, the impact is enormous.

3. Right now progressed Moon in 10 in Capricorn is almost exactly square her natal Saturn (and that doesn't sound like being happy now). There may be even more concern for how and what she feels.

There happens to be a range of more than average changes, challenges and difficulties.
Nice girls shouldn't have to be sad for so long...

There is a lot of 12th house and Neptune in her chart. The classical idea of the 12th house includes asylums, clinics and other places of seclusion. The planets in her 12th house, the elevated ruler 12 Neptune and the upcoming square of progressed Sun with Neptune tell us about privacy and isolation.

A therapeutic isolated boarding school is very much in line with the 12th house and Neptune and seems to be a good place behind the scenes (and maybe screens:)  to be right now.  Hopefully one day she will be able to deal with "life" again. She got an important Jupiter and Venus to help her see the bright sides!

Read about my Saturn-Moon experience...