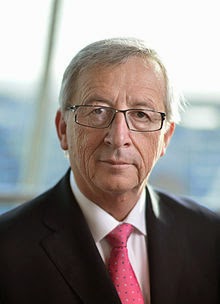 Usually, uneasy transits and progressions with Saturn mark the end of a period, with saying goodbye and farewell. Jean-Claude Juncker however, chooses to start in a top level function in the European Union, in spite of criticism that is supposed to happen in Saturn times. Here is his chart (day of birth, transits and progressions). There is no hour of birth, but it is easy to see the importance of Saturn rising before the Sun on December 9, 1954 in Redange (Lux).

Look at his chart: transit Saturn is now square progressed Sun. As Juncker is about 60 years old, he faces his second Saturn return (time to face your age, memento mori). Progressed Mars is inconjunct natal Saturn. Transit Uranus is inconjunct natal Saturn (and trine natal Sun). He could still withdraw, but nobody expects him too. He has ambitions...But given the composition of transits and progressions, he is having hard times now. The chart mirrors more endings than beginnings. How does it feel to start this way? I guess that it hurts (see transit Chiron square natal Sun).
Saturn is the symbol of management and ambition. Saturn is important in his natal chart. If Jean-Claude Juncker was born before 18 hours (6 p.m.) Saturn rises before a ‘calling’ Sun (the Sun in a starring role). The Sun is semi sextile Saturn all day. It is the signature of a person ‘in charge’, a leader with ambition, a manager who draws attention and could tend to be an autocrat.

There are more people born on December 9, 1954. One of them is a popular Dutch comedian who was given an estimate 10-15 years left in 2010 when he was diagnosed with leukemia. The other one is a Dutch football manager. Managing to be in charge is one of the things that Sun-Saturn does. Apparently, it doesn't have to be in politics, though Phil Bryant (Republican Governor) is definitely a politician, like Juncker, who is also a conservative.

Jean-Claude Juncker is very much in favor of more Europe and doesn’t really seem to care about democracy. His answer to a No in a referendum:

This man will probably become Chairman of the European Commission. This in spite of questions about his drinking habits (see Daily Telegraph). Earlier, a Dutch minister mentioned this... See the denial of Jean-Claude Juncker: http://www.lessentiel.lu/de/news/luxemburg/story/30109450

Anyway, Mr Juncker has the full support of Angela Merkel and most of the members. David Cameron*) seems to be alone in his criticism. This won’t stop Europe, …yet. Maybe it will keep Britain out of the Euro forever? There is more coming up for Europe.

There has been tension before (Uranus-Pluto square in 2012-2013) and it is a bit easier now. But in 2015 transit Neptune conjunct progressed Sun will be an undermining aspect. In 2018, when the Union is 60 years old (like Juncker now), Saturn will be conjunct the natal Sun of January 1958. That may be an important moment in history. With progressed Sun then inconjunct Uranus there will be an overdose of tension.