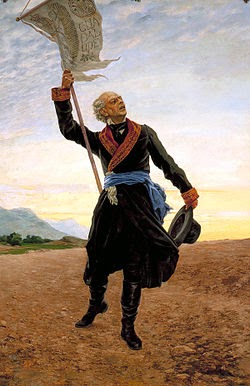 Miguel Hidalgo was a revolutionary priest who was arrested and executed. Here is the chart of his day of birth with transits and progressions for the day of his arrest. Not surprisingly (sic...) transit Uranus was opposition his natal Sun on that day. His important out of bounds and 'calling' Venus had moved to an opposition with Pluto. Progressed Venus was also square Mars*). Hidalgo's death didn't stop the revolution. His death added fuel to the fire. He started his crusade on September 16 (grito de Dolores, now this place is called: Dolores Hidalgo). That day is now Mexico's Independence Day.

Mars rises before his natal Sun and that shows us the importance of activism, energy, aggression, war, fighting, and sexuality, too. He broke all rules of the Catholic Church regarding priests and women. Venus is 'calling'... and Mars is important. It means sexuality was important and so was activism. The fact that there is a harmonious aspect with Jupiter helped him on the way to success. There were difficult aspects with Uranus and Pluto, however.

That Mars is conjunct Uranus and tightly square Pluto. The combination of Mars-Uranus-Pluto mirrors crisis and the risk of arrests. Mars-Uranus is frequent in the charts of terrorists and freedom fighters (depending on which way you look) and Mars-Pluto is eager to win, no matter what or how (think of Luis Suarez: Mars inconjunct Pluto). The intense drive to make a change, resistance and revolt, activates forces that may eventually hurt or damage you. Uranus-Pluto changes scenes immediately and an arrest is what changes it all, suddenly.

*)
Probably Venus was related to the 8th house of life, death and crisis. As his hour of birth is unknown, that will remain speculation. With no known hour of birth we won't know the Ascendant, Midheaven or Moon degrees either.