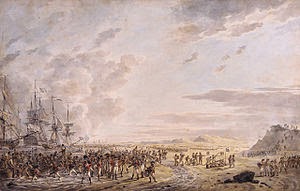 It is hard to believe today, but on August 30, 1799 a joined force of British and Russian soldiers defeated the entire Dutch fleet and invaded a part of Holland. Eventually, they had to give up and were allowed to leave the country unmolested. Now how did the Dutch chart look that day?
When a war or a battle is concerned, I always look for Mars-Eris combinations as Mars is the symbol of war and competing, while Eris is the goddess of disharmony. I use to find that combination.

That completes the rule of 3.  Watch transit Jupiter moving on to make a trine with Midheaven. That is why the victory couldn’t lastJ.]