On July 11, 2010 there is Netherlands-Spain (WC2010), during an eclipse. Let us hope that the football match is fair and peaceful and may the best team win:). It is just two times three quarter of an hour. Another kind of battle was the 80-year war Netherlands-Spain. One of the events in those years was the murder of William of Orange.
In 1584 the Netherlands had a Spanish King. (That is why in the national hymn there is a phrase 'I always honoured the king of Spain'). On July 10, 1584  Balthasar Gerards killed the the Dutch independence leader, William I of Orange, also known as William the Silent. The Spanish King Philip II gave Balthasar's parents, instead of the reward of 25,000 crowns, three country estates in Lievremont, Hostal, and Dampmartin in the Franche-Comté and the family was raised to the peerage. But the murderer was severely punished and tortured.  See the link for more..Here are the charts...
Here is the chart of the supposed to be moment of the murder, shortly after lunch time, at 13:30 (1:30 p.m.)

CHART OF PRINCE WILLIAM OF ORANGE (William theSilent)
Somewhere in my files there is a 8:50 a.m. chart of William of Orange (but is that true?). I corrected this chart for 2 more minutes to bring the progressed Mars square the Ascendant at the time of death, to reflect the attack. You see transit Pholus and progressed Pholus inconjunct Ascendant, for an important turning point .

On top, outside the circle of the chart drawing, you see progressed Mars with transit Saturn and transit Pluto,mirroring the death threat (he had a price on his head). 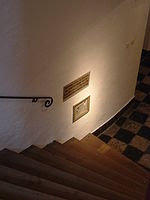 But, please note that the bullet holes are too low and a reconstruction of the murder has not been permitted...and PS See the position of Ceres on top. William of Orange is the founder of the branch House of Orange-Nassau (and the members of the Dutch royal family are his descendants). Ceres is the symbol of genes and legacy (and more).

CHART OF THE DUTCH REPUBLIC (sort of a Declaration of Indepence chart)
with transits of the match. If this is THE chart of the Netherlands, transit Jupiter is on the side of Holland. But is it:)? There are more charts for the Netherlands (see Astrodomein). 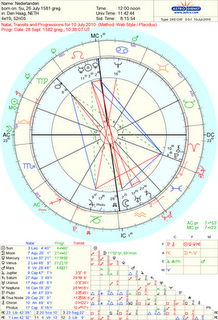