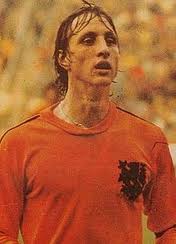 There are a number of blog posts about football on Astropost (just click here to start reading). Here is one more because of the 65th birthday of Johan Cruijff. This is the natal chart with transits and progressions for his debut (November 15, 1964).

Look at that combination again and you will see that each of the three planets involved in the 'combination of successful use of energy' have an important position in the chart.
a. The planet of drive, energy and competition is Mars. Mars, rises before the sun (planet of orientation field) and is strong in 'own' sign Aries.
b. Jupiter, square Ascendant (down under in the chart) for the international and the positivism
c. Pluto, for authority, is square Midheaven, connecting to the professional career.
This triples the importance of Mars-Jupiter-Pluto! The distances of Jupiter, Pluto and angles (Ascendant and Midheaven) make the difference between the chart of Cruijff and the charts of others born on the same day. Ascendant and Midheaven are related to time and place of birth. But that is not all.

Gender, genes, situation, conditions AND the chart worked together to make Johan Cruijff one of the best football players in the world. For that, you also need to be a man, you need to have the opportunity to play and you must get a chance. It is also great if the 'stars' are with you from the start (when you have a disappointing debut you might not get another chance).


PS Almost forgot to mention that AC/MC is sesquisquare Jupiter/Pluto!

Also visit: Astromarkt.net for example about Mars-Pluto and the drive to win.